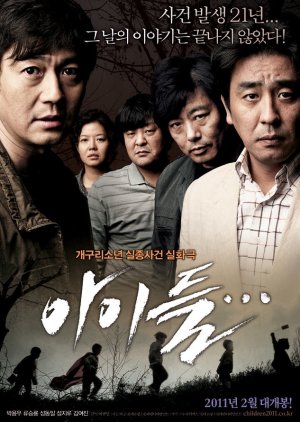 On March 26, 1991, the local elections are being held. Since it is a school day off, the five boys set off to the nearby mountain and never return. Their parents try to get the police to investigate right away, but the authorities are more concerned about guarding the election poles. Days later, thousands of police set on the mountain to search for clues as to what may have happened but nothing turns up. In 1996, a career-driven documentary maker, Kang Ji Seung is transferred to the small town after being disgraced for rigging an award-winning documentary. He then decides to investigate the case in the hopes of making a comeback. He teams up with an equally ambitious professor who hopes to make a name for himself by solving the crime where police failed. The professor’s theory, which seems to have quite a bit of compelling evidence behind it, takes the pair in a direction that the police were reluctant to investigate. ~~ Based on "Frog Boys", a true unsolved murder case from the early 1990s. Edit Translation 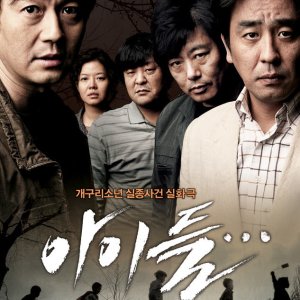 the question is simple but the answer is heartbreaking, the truth is harder than expected...

moving story about an actual case that never been resolved...the movie is based on a true case which makes the story even more painful to watch in addition the victims were only young and innocent boys

the movie represents well the family bonds between parents and their children, the hope to find the lost ones, the desperate state the parents are in, the opinion of the outside world, etc etc
it also represents well of what hardship this case brought to the different people that are involved in it

the actors did a great job throughout the movie... you could feel the emotions so sincerely and also could imagine the parents' state during that time very well
the characters were well portrayed and the story was well set out

IMPORTANT NOTE: the movie has some fictional scene in it around the ending (don't want to spoil it)
if you are interested about the case you can always google 'frog boys' / or even '1991 Deagu case'
there was another movie made in 1992 as well called 'come back, frog boys'

Completed
Senpai
4 people found this review helpful
Other reviews by this user
0
Jun 28, 2017
Completed 0
Overall 8.0
Story 8.5
Acting/Cast 8.0
Music 7.5
Rewatch Value 7.0
The film tells the story of what happened in the early 1990s in Korea, as 5 elementary school students never returned from hiking to a nearby mountain.
Based on true events and dedicated to the family that lost their children, this movie definitely reaches its goal. To make people witness what happened 20 years ago and be part of the emotional horror that the family and everyone involved has gone through and still needs to get through.
You'll stay focused from the beginning to the end, thanks to excellent direction and acting. Just when you think the movie will end, it will make a sudden turnaround and turn everything upside down. Korea, once again, shows how to make a great movie based on true events.
Although it is totally different and not so perfect it is a great movie.

New Topic
Be the first to create a discussion for Children...