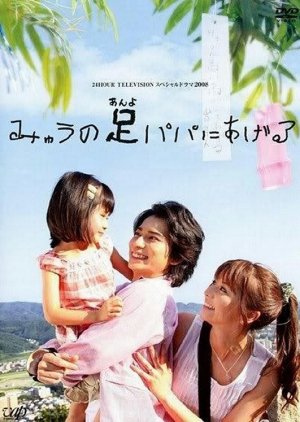 Completed
blackstar_aria
4 people found this review helpful
Other reviews by this user
0
Aug 4, 2011
1 of 1 episodes seen
Completed 0
Overall 7.0
Story 7.0
Acting/Cast 7.0
Music 6.0
Rewatch Value 6.0
Disclaimer: I am not a fan of sad tragic stories but I love Matsujun.

This was more of a peek into someone's life living with this illness. Matsujun was cute in this and so was the little girl. I literally cried because that little girl acted so well and it was so sad to me. I didn't like how many dramatic pauses this special seemed to take and how cut- up the drama seemed with the flash backs and such, but overall it was good. You really see a struggle of a family trying to keep it together. There is no glamour, no comedy, just the tragic realities of what some people live through. I may be biased saying I didnt like it becasue it kept getting even more depressing as it trodded on, but it was played well.

Completed
darkn3ss
4 people found this review helpful
Other reviews by this user
0
Jun 23, 2013
1 of 1 episodes seen
Completed 0
Overall 9.0
Story 10
Acting/Cast 9.0
Music 8.0
Rewatch Value 9.0
I re-stumbled upon this after reading a article by an MDL member then, remembered that it was in my too watch list and decided to give it a go. Well not before doing some tracking and learning that the story was based on the true story of Yamaguchi Hayato, a young man who learns that he has a rare illness known as Chronic Inflammatory Demyelinating Polyneuropathy. A disease which affects his nervous system making him begin to lose the functioning of his limbs, but he is determined to fight the illness with the support of his wife and his 2-year-old daughter, Myu-chan. After learning this I banish husband and kids, grabbed a box of tissues (just in case) and settle with my computer in a remote place in the house.

After 2 hours all I can say is that I just lo loved all the sweetness that was pact into this movie,even if I kind of feel that we were let down in the department of learning a little more about this disease( not to worry that just probably the med student in me talking...*putting my glasses on and going to hunt for a my medical books TT*)
Oh yeah I was supposed to be writing a review so let gets back to it *_* hihhi!!

Well I was reminded a lot of 1 Litre of Tears as Matsumoto Jun plays 25 year old Yamaguchi Hayato. Although I was quite annoyed still at the really clicheness of the debilitating disease aspect. But I was quite stunned by Jun acting because it was almost the the first time for me to see him deliver such a performance to the point that I asked myself if I had even ever seen him walked normally. It was a serious shock from is active role as Domyouji Tsukasa in Hana Yori Dango, seeing him bedridden and yet so sweet.

Well it can be a little hard at first to buy that him (Jun)looking so young could be a father and but the excellent chemistry between him and his 'daughter' ( sent me in a total KYA FANGIRL MOMENT!!!that I may have fried a few of my neurons :p) in the first five seconds of the movie and throughout. Well in my book the chemistry that father and daughter had totally save me from dying of boredom when confronted to the total lack of chemistry between Jun and Karina with who he teamed up as his wife(don't go pulling you hair yet and thinking that you are going to bleed, they acting actually save them, Yes they both are talented actors, your hair is safe.) Well I would still have to say that Karina was a little more better in Koizora.

With that said !!! I would say that if you are looking for an overly dramatic movie then this is not the one to be picked ( well seeing has I did not reached for my tissue box that much.) This is more suitable for a slow rainy afternoon when you are looking for a sweet movie, with a little hedge seen as it deals with a painful subject.

Well one thing for sure is that it is a movie that as that hopeful tone to it and of course a great layer of the Japanese firm 'never give up' attitude. The ending was really lovely, but it quite still left me with a burning sensation of unresolveness. Well I'd still recommend this for a rainy or sunny Friday or Saturday afternoon when you really want to escape the daily routine of your life, or when you come to a point where you are starting to forget that you should be grateful even for the little things that you have in life.

Completed
Aya97
5 people found this review helpful
Other reviews by this user
0
Sep 11, 2012
1 of 1 episodes seen
Completed 0
Overall 9.0
Story 10
Acting/Cast 10
Music 6.0
Rewatch Value 5.0
Well at first I have to say that I'm a big fan of Karina and Matsumoto Jun, so I watched this because of them...didn't expect much of it, but oh boy that was so wrong!I'm a really sucker for sad and real life movies so I just couldn't "walk" over this one.

Story: It's really heartbreaking.Thinking that this illness it really exist and their are people who have to support it and live with it for their entire life.The story was very deep...reaching the importance of trust and love between a family from the middle clas.

Acting/Cast: Without a doubt little Myu-chan surpressed Matsumoto Jun and Karina making me realise how stong a child could be and underestanding of the difficulties that surrounds her.The actors did a great job portaiting their characters and bringing me to tears almost for the entire movie.It was so touching how the bond of the three members of the family got even stonger after the discovery of the disses.

Music: I really don't remember anything about the music but that isn't important at all because the story and the acting overtook the whole time.

Rewatch Value: To be truthful I wouldn't rewatch this movie again...it's just to sad to beare with it...and it makes me think how egoistic I can be and how I should be thankfull for being healty and be able to walk without any help.

Overall: This is a very hard movie to watch.Don't watch it if you want to take a look in a romantic couple life or some braty man with lots of money...it's really serious and it can touch ones heart making you a better and a stonger person.