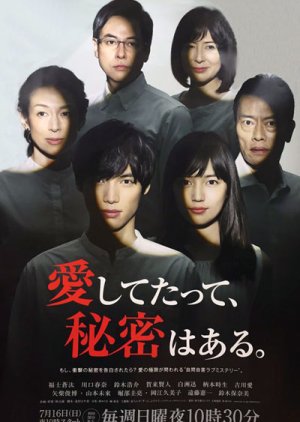 Completed
Lily13
3 people found this review helpful
Other reviews by this user
2
Oct 9, 2017
10 of 10 episodes seen
Completed 2
Overall 8.0
Story 10
Acting/Cast 6.0
Music 9.5
Rewatch Value 6.0
This review may contain spoilers
Story 10/10
I was really feeling the drama in the beginning, then it got boring and draggy. And bam, the last 2 episodes were mind-blowing. For the first time since I can't remember when, I could not predict that ending, that was sooo surprising imo. It's been a while since I saw that much creativity, I was expecting some **** SPOILERS?*****  revenge/crazy love kinda motive. BUT NOOOOO damn I was wrong. For that, I give a perfect score! (I guess I wasn't spoiled by the previous tags that were listed on MDL?)

Acting 6/10
I'm torn on that point. The cast in general was kinda good, but not outstandingly good, ya know wadda mean? Kawaguchi Haruna got on my nerves quick, especially since her character was way too marriage-obssessed. Like literally until the last second of the drama. She was nothing beside a crazy bride and her lack of emotions did not help making Sawa likeable. Fukushi Sota... is Fukushi Sota. A really pretty face, popular enough to get lots of first roles, but he still doesn't have the talent to pull them off. He is decent, don't get me wrong, but for such a complex character like Rei, he lacked the skill. (I was nearly laughing hard at his scenes in episode 10 since his acting was so over the top!). The rest, well, good!

Music 9.5/10
Music in Japanese dramas never disappoint. I love that contrary to other asian dramas, there's hardly no lyrics, except perhaps for opening and ending songs. For AT,HWA the ending is sung by the crazy talented Ieiri Leo, and she's the queen of OSTs so I've got nothing to say. All the instrumentals were on point!

Rewatch Value 6/10
Why -4 points? A simple reason. It's not a bad drama, but its rewatch value is highly dependent on the surprising ending. Once you know the entire plot, it just seems so not worthy to rewatch? Idk, it's still fresh for me.

Overall, I like the fact they made a follow-up story, available on Hulu Japan only. I couldn't see it yet, but it sure is on my to-watch list if it is ever available elsewhere.

Completed
yuyamatsushitafan
1 people found this review helpful
Other reviews by this user
0
Oct 19, 2017
10 of 10 episodes seen
Completed 0
Overall 9.0
Story 9.0
Acting/Cast 5.0
Music 5.0
Rewatch Value 1.5
I criticised a lot but you know it's a 9. It is a good drama. Go ahead and watch it!
Overall, I gave it a 9 but looking at other things u know it doesn't deserve this bias of mine.  Not fond of the two leads. thought I gave the acting of the male lead's actor a go after haven't watched him in anything for a long time and his acting is not favoured in the Jdrama-community. So what am I even biased about?  I can't figure it out. I just like it for it being able to coerce the lazy me to watch one episode after another and after another. . .
- Only 5.0 for acting/cast coz they can't emote to the maximum. The young lead actress delivers sometimes but cannot sometimes. Aside from the 2 leads,  many casts are all good.  The police was great and the male lead's mom did the best acting job, second would be Kento Kaku.
- Story is 9.0 coz I like the twists, but the director shouldn't have hinted at EP8 about who it is coz smarter viewers would already be guessing right on who that is.  That hint was so obvious. Should have waited until final episode to shock viewers.
- Music: 5.0 coz I like Leo Ieiri . If I didn't like her I wouldn't even rate this this much. The way the music is used it is tooooo much; annoying is a harsh word,  and it is not annoying at all, so I would say the soundtrack is just not optimised. Scenes that shouldn't have it should not have it playing over the moment they are doing some big thing, revelation, or an epic scene, or a crucial scene. The song just makes it awkward and cheesy.
- Rewatch: 1.5  for all the reasons above.

but I'm satisfied with having watched this show. It is not a regret. It is a good show.  Recommend for everyone.

Completed
arashinta
0 people found this review helpful
Other reviews by this user
0
Nov 20, 2019
10 of 10 episodes seen
Completed 0
Overall 8.5
Story 10
Acting/Cast 8.5
Music 8.0
Rewatch Value 8.0
[WARNING: the rating and review I give have the possibility to be subjective due to my preference for the genres, scenes or casts]

“Whatever the reason, a crime is a crime.”

“No human being is born for the purpose of hurting another.”

The pace is quite slow in the beginning ... and honestly I'm kinda bored at the start (^_^;) But, the story getting better and better when Rei start get more eerie message. A lot of secrets included and I love how that secrets slowly reveal. I love how they're connected to each other and I really love the last secret of Rei.

Fukushi Sota and Kawaguchi Haruna not my most favorite actor and actress, but their act are really good here (^_^)

Completed
Aladdin
0 people found this review helpful
Other reviews by this user
0
Feb 20, 2018
10 of 10 episodes seen
Completed 0
Overall 8.5
Story 9.0
Acting/Cast 8.5
Music 8.0
Rewatch Value 8.0
This review may contain spoilers
I was really thinking this drama would be boring. Fyi, I just finished watched Descendant of the Sun when I started to watch it. It was like (cultural term: culture shock) a shock when I watched this japanese drama. Also, I was really thinking the plot would not be a complicated just like korean drama. Yet, I kept watching. My motivation to watch it was because the female protagonist (I just knew her name is Kawaguchi Haruna when I wrote this review) is so cute, so-my-type, and... I love both japanese and korean drama which has cute and so-my-type female main character. Until half of whole episodes, I was still thinking the ending could be predicted. But! Yea, I can't write a spoiler here.
Story: Interesting, you would like to see the ending as soon as you want +5
Plot twists: +2
Cute protagonist: +0.5
Rewatch it to understand who is who, why 'it' happens, and to answer so many questions in your head +1
It doesn't have humor (It's not like korean drama which can always make me laugh): -1
Music, soon after I heard it, I like it! +1
Total: 8.5