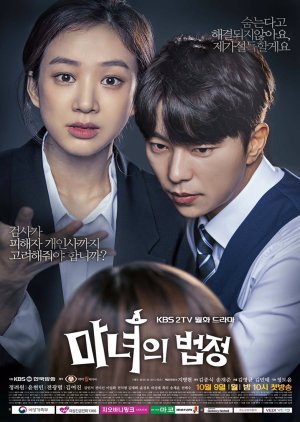 Ma Yi Deum, a materialistic female prosecutor who does not hesitate to use personal attacks, fabricate evidence, and incite perjury in order to win her case is assigned to a special task force for sex crimes. Yeo Jin Wook, a newbie prosecutor also joins the task force, and together they solve crimes with a grudging chemistry. (Source: KBS World) Edit Translation

Where to Watch Witch's Court 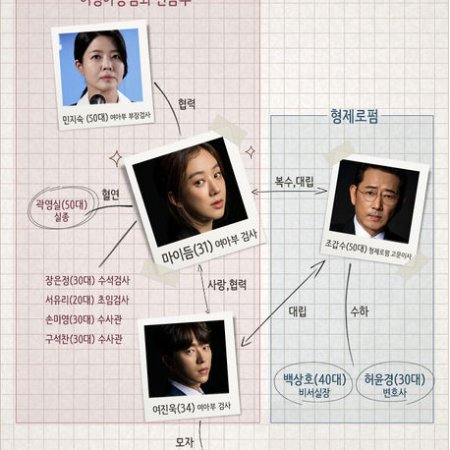 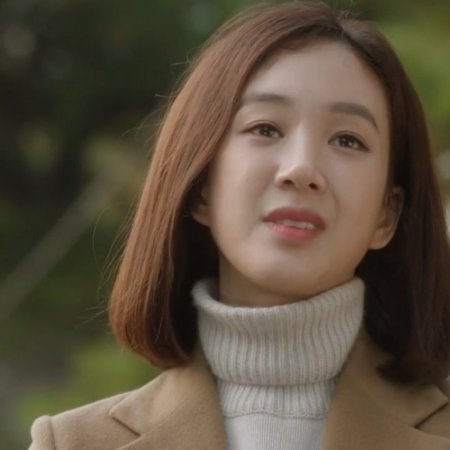 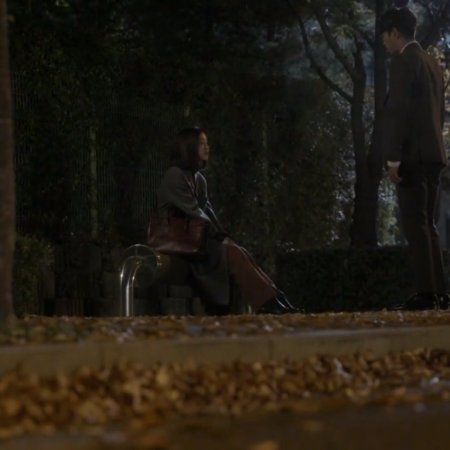 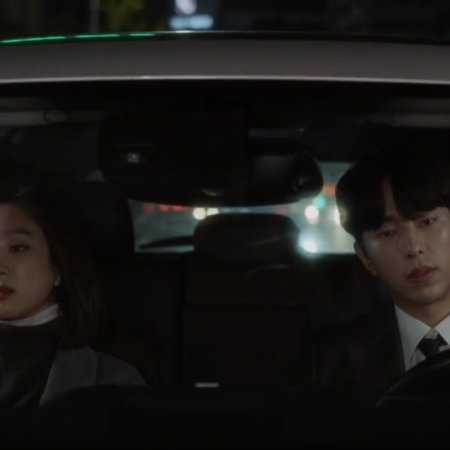 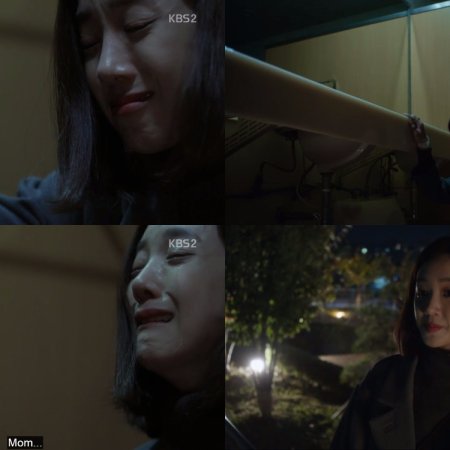 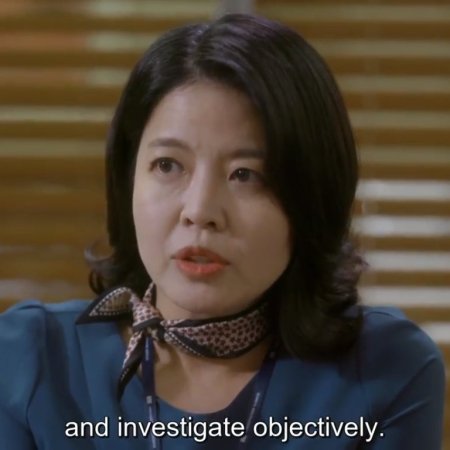 Completed
Jeana
41 people found this review helpful
Other reviews by this user
2
Nov 28, 2017
16 of 16 episodes seen
Completed 2
Overall 6.0
Story 5.0
Acting/Cast 8.5
Music 7.0
Rewatch Value 1.0
In all my time watching dramas, this was the first time I hated giving a show a relatively lower rating. Witch's Court seemed, on the outside, like a dream come true for me. A law and crime drama, paired with a kickass heroine and a dash of romance? What could possibly go wrong?

It was one of my highest anticipated dramas of 2017 and I was expecting that first episode in and I'd be ready to give it a solid 10. However, as I watched the series, one by one all my hopes came crashing down.

The drama's worst flaw was its lack of an original plot. The fact that it was extremely badly written with a truck load of plot-holes and stroppy pacing, didn't help the case. From the first episode to the last, I guessed everything that was going to happen. It was such cliché, same old bs that at one point, I was even correctly predicting the character's dialogues before they spoke them. I saw plot-twists coming from miles ahead. I knew exactly what the main leads were going to do and how they were going to do it. Trust me, it ain't a nice feeling when you're ten steps ahead of your main leads.

Some people say that a show is only as good as its antagonists and that is one another point where Witch Court loses out on. From the daily episodic rapists to the main antagonist, all the villains were less than mediocre and slight variations of one another. It's like they were trying way too hard to be evil but unfortunately, ended up being cheesy instead.

You know how when kids do something bad, like steal a cookie and you ask them about it and they're all innocent smiles to your face but the moment you turn your back, they start smirking mischievously, triumphant that they managed to ''fool'' you? That's exactly how the bad guys were in this show.

The cringey smiles and 'evil laughs' they gave behind our main lead's back just added to their extra personalities and not in a good way. I mean how many times before have we seen a story about a corrupt Mayor in power being the villain, acting all nice and kind infront of the camera? Too many times to count. Bring me something new, please.

All the side characters were poorly constructed, barely making any contribution to the plot.

At first, I was very intrigued by our male lead. He seemed like a breath of fresh air, unlike the typical macho alpha assholes. He was supposed to be this smart, gentlemanly guy who actually gave our heroine the upperhand. How amazing, right? Not really.

Even though he is made out to be different from all the other drama male leads, the show still shoves him into the 'cool tall neighborhood oppa' stereotype. I'm always amazed when everyday prosecutors adopt ninja fighting skills out of nowhere. But those things were the least of his problems, because as the show progressed he became increasingly annoying. I love my upright handsome guys who're adamant to uphold the law but, Prosecutor Yeo was just all talk and no show. He had the classic 'dumb but heroic' vibe throughout. Way too self-righteous and equipped with dramatic declarations, he didn't do any of the actual work and soon became a pain in the ass I could really do without.

Even though the show is tagged 'romance' there was nothing of that sort here. The main couple had no chemistry and they just seemed like regular colleagues on good terms.

Surprisingly, the show did its flashbacks fairly well but like I mentioned before, the pacing was shit. Things that needed to be drawn out and be dramatic were so anti-climactic and things that needed to be rushed on were dragged out.
Some things that happened were so questionable because they were far out of the sphere of logic. Most of the times, our prosecutors won the cases because of convenient plot devices instead of actual smarts.

So seeing all these flaws, it's quite just that I rate it low right? But why then, does it pain me so much to do so? Well the answer is: Ma Yi Deum.

The heroine of this show was undeniably the saving grace. She was the only thing unique about the otherwise run-of-the-mill drama. Watching her antics was absolute bliss. Jung Ryeo Won brought forth a character that was extremely real and relatable. Often, I felt like she was my soul sister considering how many similarities I had with her. This is also why she was so easy to connect with.

I loved the fact that she went through life staying true to herself and not giving a fuck about what people thought. Even though, at times, she acted like she was all over the place, in reality she was a very composed and strong woman. Her face remained impassive in the worst of situations and she always had some clever tricks up her sleeve. Her bright smile, dark red lipstick and bad hair cases gave me so much life.

She was the one making the show, for every second she went off-screen the show turned utterly boring. Ma Yi Deum was so lovable and a character that I'll always remember. This is the reason why, even though I have a lot of problems with this show I still reccomend it so that other people can witness Prosecutor Ma's quirky weirdness and like me, be thoroughly entertained by it too.

The fact that the show revolved around rape cases is something I found to be commendable. Rape is a taboo topic and people often hesitate talking about it so openly and this show (while not perfectly) still managed to bring some fairly brutal cases on the forefront and that effort needs to be acknowledged.

The OST doesn't really stand out but the instrumental that plays at Ma Yi Deum's badass moments was really good.

I hope who ever reads this considers this review a good thing, instead of being let down because this will lower your expectations and then when you do end up watching the show you'll be pleasantly surprised.

While this is not a drama you can go in with the thought that your high hopes will be met, it is definitely a good time-pass.

The first four-six episodes were some of the best things I’ve seen since Save Me. they were flashy, dynamic, and unique, and I absolutely loved them. Unfortunately, the drama loses its initial charm and uniqueness after that. Witch’s Court is a perfect example of a drama that had great potential and an excellent start, but failed to keep that momentum going throughout the entire drama. I love the characters and the original premise, so that’s why I’m settling on a 7.0.

The plot hits off with a bang, but quickly fizzles away into a standard law drama. When they start digging up the past, the drama gives me makjang vibes. Like everything and anything can be a secret. ugh, the reason I loved Witch’s Court was because of the amazing and unique first eps, but the plot made a negative turn in the middle. There is romance, but I feel like this drama would’ve been better without it. If the writers wanted to add romance, they should’ve developed it more. The romance starts at the beginning, goes MIA in the middle, and then suddenly appears at the end again. It’s uneven. Plus, I think ‘no-romance’ would’ve fit the concept of a strong female lead who doesn’t need a man. Nevertheless, I can’t deny the fact that prosecutor Ma and Yeo gwam look hella cute together xD i do think it would’ve been better if they were just friends tho…

Ma Yi Deum is arguably one of the best female drama leads I’ve ever seen. She isn’t afraid to put her own reputation on the line just to win a court case and is willing to do anything in order to get what she wants. heck, prosecutor Ma is one awesome character. She isn’t black or white--she’s gray. I wish we had more female characters like her in dramas. Throughout the drama, we see prosecutor Ma grow and develop into a more righteous prosecutor and I respect her so much. I also love how the gender roles were reversed in this drama. Usually in dramas, the guy is the arrogant and sly one, but Yeo gwam is a fair and honest prosecutor (quite the opposite from prosecutor Ma :P). I love Yoon Hyun Min; this is my second time watching him and his acting is great. the teamwork we see from the CAGU is awesome. It would’ve been great if there was more development from these side characters. side note: Cho Gap Soo is one of the evillest villains I have ever set my eyeballs on after Spiritual Father from Save Me. he felt very real and it’s scary to know that there are people like him in the real world.

Overall, an okay law drama. I kinda felt like it was a waste of great characters since the plot was weak, but I still enjoyed it. Not a must watch, but if you’re craving an amazing female lead, give it a go! it was a fun ride and I’m going to miss our Witch’s Court squad :’) 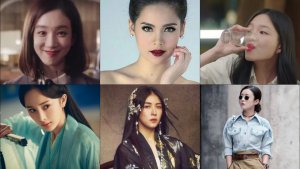 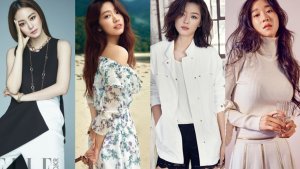 My Top 10 Most Gorgeous Korean Actresses (and Yours Too!)