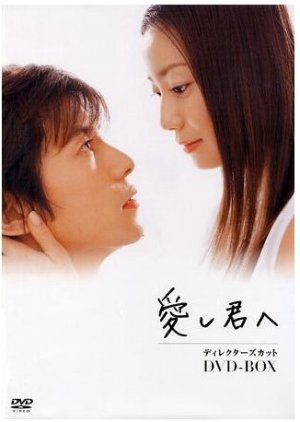 Completed
FarahNeseli
21 people found this review helpful
Other reviews by this user
0
Jul 22, 2012
11 of 11 episodes seen
Completed 0
Overall 9.0
Story 9.0
Acting/Cast 9.0
Music 10
Rewatch Value 8.0
Itoshi Kimi e is a heartwarming, uplifting, simple yet elegant drama. As one can guess from the synopsis the plot isn’t very original. May be it was in 2004 but in the past few years we’ve been presented with countless dramas in which the main characters are diagnosed with rare diseases. That is the very reason why I didn’t pick this drama up sooner though it had been on my watching list for a long time. If you look at only the basic storyline, it may not appear to be something extraordinary but the intriguing metaphors, conforming cast, moving performance and adroit direction altogether work out to distinguish
this drama from the ones sharing similar plot-line.

The story is depicted in a narrative style. Each episode starts and ends with deliberate, thoughtful insights of one of the main characters- Shiki. The drama follows a very classic style accompanied by beautifully fitting music and subtly progresses to unfold various events and develop the relationship among the characters. It tells us the memorable yet unlikely love story between Shunsuke, a talented and famed photographer, who is about to go blind in a few months and Shiki, a kind-hearted and unpretentious pediatrician, who seeks to define her role in the final moments of her beloved one. I said ‘unlikely’ because the role of Shiki wasn’t supposed to be the one who stands by Shunsuke at the end; rather it was meant to be that of a “mere audience”….. as she herself described it. One of the many things I liked in this drama is that it does not use the word ‘love’ lightly or take this intense feeling for granted rather it seeks to find out the true meaning behind it. As a result, we get to enjoy the detailed, gentle, fateful encounters which brought these two destined persons together. The meaningful sub-plots, perceptive dialogues, appreciative characters stir our emotion, compel us to ponder over life and appreciate what we have even more.

This drama has an ensemble of beautiful characters. Each of them shines in their own way and enriches the main story with their own follies, hardships, sadness and joys of life. They are not perfect but they tried their best to do the right thing from their own perspective and that’s why they felt so real. They are not persons who disregard the pains of others only because they didn’t have the misfortune to experience those themselves and that’s why I loved all of them. I promise that the characters will surprise you, will make you cry and laugh along with them.

I’ve always liked Fujiki Naohito but in this drama he was simply gorgeous. Kanno Miho did a fairly good job as an innocent, honest, young doctor. The rest of the cast was just impeccable.
Although the storyline hints at being pretty solemn, it’s not tearfully sentimental. It’s also a drama about family and friendship with lots of funny, humorous moments which make the mood lighter at the appropriate time. There are some dramatic, cheesy and predictable moments but it doesn’t affect the overall excellence of the tale.

I decided not to over-hype it but don’t think I succeeded. The plot isn’t unique after all and I’d recommend it only when you are in the mood to try something slow, earnest but significant. The very last scene of this drama is one of the most beautiful ones I’ve ever seen in a drama. Even if you don’t like the drama as much as I did and decide to drop it, I’d ask you to watch the last few moments of this drama and I believe it’ll be able to touch your heart.

Completed
Nina no Papa
9 people found this review helpful
Other reviews by this user
0
Mar 8, 2014
11 of 11 episodes seen
Completed 0
Overall 9.0
Story 9.0
Acting/Cast 10
Music 10
Rewatch Value 9.0
A very heartwarming and touching story for sure. Everything about this story was very well balanced, the actors, I don't think they could have chosen better actors for this drama, the music score was really great too. I would most definitely watch this one over again. You could see the love grow between the two, it's just too bad they had to once again throw in a stupid love triangle for good measure, or so they think.

Had it not been for the dumb love triangle this would have been a true masterpiece with a rating of 10.
Was this review helpful to you?

I’m a fan of these types of dramas where the main character is sick and they still find love with someone. I enjoy these type of dramas more when the male mc is sick and the female mc loves/supports them then the other way around but I do love both kinds. It creates a beautiful love story.

Story- I loved how these two met. That first episode made me cry. The sickness is a little bit different because the main character is losing his eyesight. I found it interesting that Azumi was a photographer which he needed his eyes for. I loved the kids at the hospital where Shiki was taking care of them. The family in this drama is another nice thing to watch from Shiki’s family and Azumi’s. I agree with many people who have seen it that the last scene of the drama is a beauty.

Actors/Characters - Kanno Miho as Shiki was my favorite character in the drama. The one reason I just loved her was how she cared for anyone whether it’s her friends, patients, family, or it was Azumi. She would do as much as she could to support Azumi because she loved him so much. I have never liked Fujiki Naohito but lately I’ve been seeing him other dramas as supporting roles and I have changed my view on him. Seeing him here as the main character has made me enjoy him more. Shiki’s dad is another enjoyable character he makes you laugh and feel thankful for.

Music - i just thought the music was fine nothing too special. It goes well with the drama. There are some nice soundtracks to go along as well. It doesn’t stand out as much in the drama.

Rewatch value- This was a little new to me. Most of these actors I haven’t seen much before and that’s something I liked. I want to rewatch this drama a lot because I loved seeing Shiki and Azumi together. There are also precious scenes I love too.

Completed
pash
0 people found this review helpful
Other reviews by this user
0
Apr 24, 2020
11 of 11 episodes seen
Completed 0
Overall 4.0
Story 1.0
Acting/Cast 8.0
Music 6.0
Rewatch Value 1.0
Kanno Miho's performance was very good, but not even that is enough to save this dorama. Poorly scripted, unoriginal, predictable, cheesy. In a romantic drama the audience is supposed to root for the leads, but that's very hard to do here since the main male character is such a selfish, weak, spoilt and despicable 1st-class a-hole. And the way the elderly characters are written is just a disgrace: bidimensional characters, almost caricatures...one is little more than an ornament, always wearing a traditional dress and a faint smile and watering flowers or serving tea or such things, the other's a drunkard who speaks like a punk (those family scenes are supposed to add some comic relief, but they're just embarassingly bad). What a waste of Kanno Miho's talent! :/