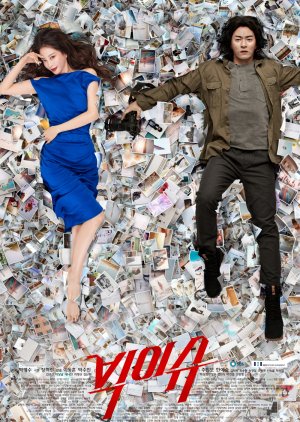 Big issue is a good drama . The one which keeps you wanting for more .
A totally new outlook from the perspective of paparazzi media , with retro vintage music combined .
In short Big Issue is a complete package of enjoyment.
Everything makes sense.
Greed, power, money, nothing's much overhyped here like all K dramas do .

It's all within the limits of the person's capability .
The difficulties they face , I mean even being that to is not easy .
Each and every relevant fact have been factored out .
In short
This drama is a masterpiece .

ACTING :
You know many actors and actress play certain roles but in this drama they have this Aura of the character they're playing .
They have one of the best chemistry .
Specially Han Ye seul , What a gorgeous beauty .
She has the talent of acting with her eyes and expressions .
I was just mesmerized by her throughout this .

ROMANCE :
Are you a fan of cold romance ?
Then welcome to the club .
This drama will make you crave for it .
But you'll get really nothing except little niggles in b/w .
This has one of the coldest romance ( If you've seen K2 you know what I'm talking bout ).

PS : The biggest hidden lesson is the social media outlook .
Photos , how dangerous can they be ?
I mean just think of the fact that if you're being monitored everytime . How would that feel ?Even thinking bout that makes you cringe , right ?
Now what if it gets leaked to the world .
That's it I will leave you here to wonder .

Completed
kez
5 people found this review helpful
Other reviews by this user
0
May 4, 2019
32 of 32 episodes seen
Completed 0
Overall 10
Story 9.5
Acting/Cast 10
Music 8.0
Rewatch Value 9.5
This review may contain spoilers
Big Issue has been a random drama for me to watch. I only watched it while looking at Han Ye Seul's instagram wondering what drama is she going to be on. Little did I know, after watching the first two episodes, it got me hooked already. The way Han Seok Joo risked his life on that train to get the photo taken was surprising for me. I guess this is how paparazzis work? Anyway, I liked this drama because it gave me the other side of the entertainment, politics and media industry. I think I was only secluded with the happy and positive environment that the korean dramas show.

It's a dirty. The drama revealed many things especially with the current situation that Korea's facing right now. It might not be the EXACT thing, but it somehow connected it to the issues that's happening in there now. I loved the cast, so much. They exert so much effort to bring out the emotions and what their character is thinking. Kudos to Han Ye Seul and Joo Jin Mo. They were really good and to be honest, I liked their chemistry.

To cut this, since it's getting longer, if you're interested to see what goes behind the camera, pretty pictures and smiles of your favorite actress, figure, try watching this. It's going to blow your mind because while watching, this thought might occur to you: "This is actually happening in Korea" or any country to be honest.

That's it folks! I hope you guys watch this drama. I really loved it. I'm sad it had to end.

Completed
russian white bear
1 people found this review helpful
Other reviews by this user
0
May 10, 2020
32 of 32 episodes seen
Completed 0
Overall 8.0
Story 8.5
Acting/Cast 8.0
Music 8.0
Rewatch Value 6.0
i honestly wasnt expecting much from the plot or synopsis alone but the execution was great. although they could do with a cleaner script as it can be a bit confusing during some parts.
this kind of story isnt something new, its been thought and done but few are as good as thins. its the character that bring the different. i love how both leads are kind of 'nutjob', they dont hesitate taking things to the extreme. i specially like ji soo hyun, shes the kind of cool female character that talk less and do more, the kind that show her feeling and emotion through her action.

Completed
Bali
0 people found this review helpful
Other reviews by this user
0
Aug 21, 2019
32 of 32 episodes seen
Completed 0
Overall 9.0
Story 10
Acting/Cast 10
Music 8.5
Rewatch Value 6.0
This is a great and brilliant intrigue drama that uses the paparazzi world as the backdrop to a very powerful story. Paparazzi are independent photographers who take pictures of high-profile individual from all walks of life and sell them to the highest bidder from media outlets that focus on tabloid journalism and sensationalism. The drama poses the reality of how greed, power, money, and ambition lead people to manipulate social media to move the masses from left to right and vice versa while utilizing pictures taken by paparazzi to bribe and control powerful people. It will be safe to say that in this drama the idiom "A picture is worth a thousand words" describes perfectly the drive behind the drama’s plot. The cast did a fantastic job bringing these complex characters to life. The story is well written and the dialogue is smart and powerful. Although there is a strong attraction and complicated circumstances that bring the lead couple together, there is no romantic storyline, but the leading man’s persona holds the drama together. Enjoy it!

Completed
busymomshee
0 people found this review helpful
Other reviews by this user
0
Aug 25, 2019
32 of 32 episodes seen
Completed 0
Overall 8.5
Story 9.0
Acting/Cast 9.0
Music 9.0
Rewatch Value 7.0
This review may contain spoilers
this drama is indeed one of my favorite action-mystery genre. it tells a story of a paparazzo ( and i have absolutely no idea that they could be almost like those in the mission impossible james bond almost c.i.a. like movies) and i love the plot!
major characters are well played especially the male lead mr jo jin mo! hes hot! ???? still hot even when he played the male lead in the 200 pounds beauty. for han ye seul i didnt know she could play well in an action mystery drama i got used to her rom coms ????
Was this review helpful to you?

Completed
kenyandegenerate
0 people found this review helpful
Other reviews by this user
0
Jun 17, 2019
32 of 32 episodes seen
Completed 0
Overall 10
Story 8.0
Acting/Cast 9.5
Music 10
Rewatch Value 8.0
Omg waaat .I don't even know.The show starts strangely with a bang unlike other shows that build the plot. U are hooked right from the beginning because it is believable as in i can see a paparazzo doing everything in there work to get pictures.( I have seen the daily nation or tmz).
The actors all have a way of supporting the story nobody felt out of place.i loved them all.I can't explain just watch it i promise you will not regret.
The music was also awesome .it matched the show.
As you can guess i loove this show Or I would say u swahili napenda too kipindi.
Please watch it and give it a try be open minded.

I need to drop this

I'm watching this because of Han Se Yeul, but this kdrama is kinda slow and I feel bored watching this so I need to drop this, but if you like an action genre more than romance I guess maybe this is perfect for you, this kdrama is just not my type, I don't like Jang Hye Jung say that she likes Han Seok Jo, I'm hoping Ji Seo Yoon is the one who says that.

It's gonna be great if this focused to Ji Seo Yoon and Han Seok Jo, I've try to watch it again and see if I'll like it or not but it's still the same, I can't finish it.
Was this review helpful to you?

Dropped 6/32
ladyroadx
0 people found this review helpful
Other reviews by this user
0
Apr 10, 2020
6 of 32 episodes seen
Dropped 0
Overall 4.0
Story 5.5
Acting/Cast 7.0
Music 7.0
Rewatch Value 1.0
Ok, I normally only write possitive recs since there is enough people critisizing dramas due to liking the characters, actors, couple chemistry and plot... But this one has serious problems even without taking those into account.

1st HUGE problem is edition. I was watching episode 6, and they left many unedited or poorly pasted screens in scenes, in which, if they wanted, could have solved them by avoiding showing the pics, or screens... But there are other scenes in which they pasted cuts from other scenes into scenes that should have been integrated using CGI but they didn't.

The first 2-5 eps were ok in this sense, but, I can't continue watching something like this when there is a HUGE TECHNICAL MESS when only cutting those scenes could have solved it.

2nd Problem: the elitist female main character, so rich and powerful maybe a little too over the top and difficult to approach... I don't know much about this world, but it doesn't feel realistic or natural. They create a new environment where this people control the world most powerful people with near spy devices and techniques (which may be true but it still feel forced). The operations room with the motorbike like computers... WTF?

3rd Problem: They spend too much time in every case subjects life problems, like mini dramas into the real drama, and makes it really slow.

4th Problem: They make an effort to portray a devastated alcoholic man that risks his life to take pictures for a sadistic boss, but in 4 episodes he is almost cured. They want to make a dark atmosphere where every body exploits everybody's weaknesses for an exclusive, but it feels like the male protagonist accepts it too easily.

5th Problem: WHERE ARE THE SUPPORT ROLES? There isn't ANY comic character, no close friends, no rivals, no backgroud characters that stays more than 3 mins on screen (or that have a real relationship) that are not: employees that only talk about work, homeless people (that I thought would be the comic ones, but nope), every episode temp characters...

I'm not watching anymore, maybe in the future if I get bored, but it was this series what I found boring, I love action dramas like The K2, The guardians, Lawless attorney, 2 weeks, and I thought this one was foing to be like them because of the first episodes... BUT WHAT A DISAPPOINTMENT!

When you are more on your smatphone than watching the drama, you know that you are not enjoying it.