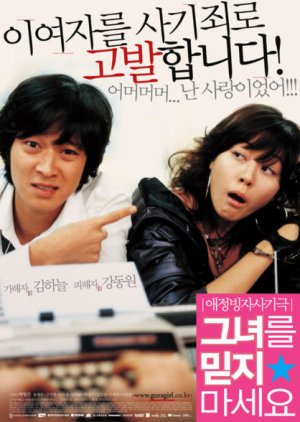 Ju Young Ju, a beautiful ex-con artist who has been recently released on parole, is planning to attend her sister's wedding. On her way, she crosses path with Choi Hee Chul, a shy and unsure young man who is on his way to see his girlfriend in Seoul. By a small series of unexpected events, the precious ring that Hee Chul planned to give to his girlfriend end up in Young Ju possession, which at the same time, loses her bag. With the only information she had managed to gather on Choi Hee chul, she decides to find him, give him back the ring and take back her bag. However, at the moment of giving back the ring, her old lying habit kick back and obviously, hilarity and adventure ensues. Edit Translation 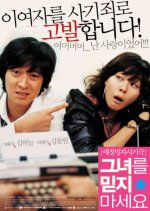 I remember watching this film in a "Friends night", I wasn't the one who chose it but I appreciated the choice.

Generally speaking,the film's story wasn't original or great but the script writers knew how to get the audience intention.

*This film is directed to any type of audience since it has the elements that would keep most of viewers attracted.

--->Humor: It made this film cool and light plus laughter scenes were so diversified and frequently present especially at the beginning. It's the type of humor that keeps you expecting more, the funny scenes were hilarious especially for those who like comedy because when you don't laugh, you would be smiling.
Even though this genre wasn't present in the middle or near the end but it's considered as highly satisfying.

--->Romance: Since it's a romantic comedy, the romance was fair enough to the film's genre. I wouldn't say it's the most attractive romantic story but it was acceptable enough to consider it as a positive point.

*I will mention that some situations were badly expressed in a way that would make you think that story lacked something.
*There were some blank moments during the film.
*The story wasn't really that special nor very captivating, it's the humor that gave it charm.

I am always amazed by this actor's skills, charisma and the way he portrays his roles. Here he was a little different from his other productions but I would say that this film proved his amazing acting skils since he can adjust to any character.
Speaking about the character, I would say that it has the kind of naive personality but it gave me good laughter moments. I wouldn't judge Choi Hee Cheol deeply because its actions were set by the story so I rather praising Kang Dong Won acting.

I am sort of used to her roles, this actress is predictable somehow. Here, it wasn't any different but her way of expressing the character was appreciated. However, I have to admit that her way in portraying the role was a little weird at first then as the film went on everything was set smoothly.
The character is one of those independent females. Ju Yeongju lies and professional pretens made the character appealing and enjoyable most of the time plus it was really convincing.

*Other cast: most of them were acceptable exept Ju Yeongju friends, they were really annoying to watch. I speacially liked the grandmother, she was really funny because of the line that she always say.

--->Romance: I wouldn't say there was a great chemistry here but it's all due to the storyline.

--->The leads relationship with the family and the village members: it was really cool to watch; it was sort of heartwarming and great to see how everyone treats each other.

It was predictable yet cool.

*I was giggling with my friends almost most of the time, it was fun.
*There weren't a lot of boring moments plus it was entertaining.

*Is this film memorable : If I will keep any memory of it, that would be because of the funny moments that I had while watching this film.

*If you like romantic comedies then you may want to watch this.
*If you would like to laugh then this is for you.
*If you're looking for an entertaining film to pass time with then watch this.

Completed
xeenatheprincesswarrior
10 people found this review helpful
Other reviews by this user
0
Feb 4, 2013
Completed 0
Overall 10
Story 10
Acting/Cast 10
Music 9.0
Rewatch Value 9.0
I was rolling on the floor watching this movie! it was so hilarious and I also cried at the last part!
The flow of the story is so perfect that you won't notice it's almost the end! I really enjoyed watching it even I am alone. My mom was staring me with weird expressions because I was like crazy laughing by all by myself.

I fall in love when Hee Chul sang in English! OMG! he really has a nice voice, so you guys out there, watch it out!!

I freakin' laughing how they mistreat Hee chul because of Young Jun!

The love chemistry between them is so natural and they really match!

Guys who love romantic comedy must watch this! It also show lessons in life so it's not wasting your time!

Anyway, it's a two thumbs up and must watch movie! I will again watch this and laugh by myself again! 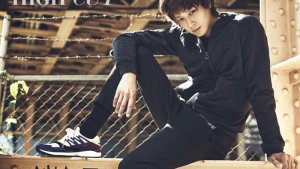