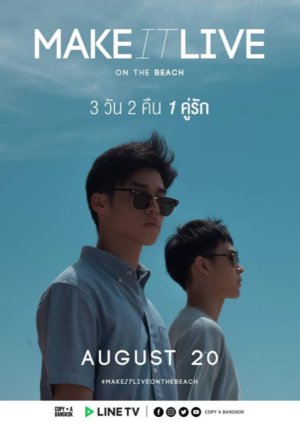 Tee and Fuse make a memorable trip to the beach on their third anniversary and together they reminiscence on their early days. Edit Translation 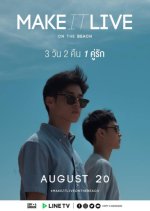 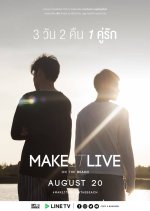 Completed
Synchonicity
7 people found this review helpful
Other reviews by this user
0
Sep 29, 2019
6 of 6 episodes seen
Completed 0
Overall 4.5
Story 4.0
Acting/Cast 7.5
Music 5.0
Rewatch Value 3.0
This review may contain spoilers
This was disappointing, but a last-ditch effort at the end sort of saved it.

There was a sadness throughout the whole series (just 6 short episodes), with Tee and Fuse reuniting for their third anniversary together... except, from as much as we could tell, Tee and Fuse are attending different universities so they haven't seen each other that much in these three years.

Peak (Fuse) carried the series with very good acting, showing lots of emotion and crying real tears in just about every episode. Boom (Tee) was subdued pretty much all the time. At one point, we hear him speaking to his mother on the phone and, from what we can gather, Tee's mother is against his relationship with Fuse, with Fuse overhearing Tee's side of the conversation. Unfortunately, we get nothing from Tee regarding his own feelings... there's just an unspoken resolve that Fuse will break up with Tee, so that they can both get on with their lives.

In the last episode, Fuse tearfully says goodbye to Tee, but Tee stops Fuse from leaving. Tee calls his mom and says that he will stay together with Fuse and that's that. The series ends with video messages from many of the former Make It Right cast members congratulating Fuse and Tee.

The story was not well written. Sure, we can all understand the issues that young gay men often go through with their families, but it wasn't addressed at all.

Lukmo and Ess showed up to provide some levity (I'm not even sure why Ess was there), but their presence fell flat... the scenes with them felt awkward and forced. The very few attempts at comedy (Fuse/Tee shaving in the bathroom; a couple of fun moments with their friends) weren't enough to save the overall depressing feeling of the series. The video messages with the former MIR cast members did help to provide a somewhat satisfactory ending.

There is nothing wrong with presenting a drama here but, if that's what they the producers were going for, it just wasn't good enough. Too bad, because Fuse/Tee are a decent enough couple. Both actors deserved better, especially Peak (Fuse).

If you’re a big fan df the “Make it Right” series you’ll overlook the technical challenges of Make it Live: on the Beach and be happy with the continuation of the Tee/Fuse story. As an overall storyline Make it Live: On the Beach falls albeit flat mostly because of its unnecessary length and poor writing. This is especially obvious when you compare Make it Live against the excellent short continuation series in the same Thai BL genre such as Our Skyy, which continues/ends the storyline of five beloved BL series’s, or ReminderS which weaves the three year later story of Phum and Noh from the LoveSick series with a new storyline with the cast from the Love By Chance series. Thankfully, the six episodes are short so you can live with the pacing but I can’t help feel that better writing would provide depth to the characters and the series.

The acting in Make it Live isn’t too bad. Peak’s acting has gotten much better from MIR. He does a good job of going from happy to sad and back again while still being the childish Fuse. Boom, on the other hand, seems to be about the same, not really developing from his MIR days. The central theme of the story was Tee’s conflicts and Boom had challenges achieving this, is that acting or poor material?

Usually in Thai series they leverage a second or third couple to add a bit of depth. Unfortunately, any scene with Ess and Lukmo were pointless. In MIR Lukmo was the comedic relief but in Make it Live he was just there. They both were just unnecessary fillers that didn’t do anything to advance the story which is too bad as I liked Lukmo in MIR. Ess and Lukmo weren’t a couple in MIR so the writers couldn’t randomly add them as a second couple/storyline. It would have been interesting to see what the plot line would have been if they got Ess’s or Lukmo’s respective significant other meaningfully cast if that second storyline would have added more to depth to the series like it did in ReminderS.

Even with the lackluster storyline and writing, there’s potential in this series and if you want a little blast from the past and relive that Tee/Fuse love it’s worth the time to watch. I think all of us are hopeful that this is a foundation to the continuation of this couple or maybe even an MIR 3 with the expanded storylines of the other couples.

My interpretation of the story below. There are some spoilers.

The storyline of Make it Live: on the Beach starts three years after the end of MIR 2, when Tee and Fuse made their relationship official at the conclusion of the series. It seems that both Tee and Fuse went off to different colleges. Although they stayed together as a couple, the distance and college commitments meant that they didn’t spend a lot of time together. The trip to the beach was a celebration of their three years together but also a possible end to their relationship as Tee, as we find out during the series, was receiving pressure from his family to end his relationship with Fuse and presumably marry a girl to carry on the family tradition. The trip to the beach was their way to hopefully make their relationship live.

These competing emotions (celebration and end) are played out through the six episodes. Both Tee and Fuse spend the trip validating their relationship and professing their love for each other while a cloud of dread hung over them of the reality that their relationship would come to a forced end. Fuse had all but embraced the fact that their relationship was ending and was making the best of the time that he and Tee had together. Tee, on the other hand, was fighting the battle of his heart and family obligation. The ending is a bit cliche and rushed. I was not convinced that moment was the tipping point for Tee.

I think that the writers could have spent more time playing up Tee’s inner conflicts. In MIR they did this by setting us several scenes and concurrent plot lines to show what Tee was going through. Where as in Make it Live, it was way too superficial and Boom’s acting limitations (or the inability for the director to pull it from him) couldn’t make-up for the poor writing. Refreshingly, Peak was able to make his character show his. You could argue that Fuse always wore his emotions on his sleeve while Tee was more of an introvert. However my argument back is that there are myriad of short films and the aforementioned Our Skyy series, that do a much more effective job with their actors and writing to show this conflict, even with introverted characters - see Krist in the Sotus series. I think better writing would have elevated this series and warranted its length.

I thought that the congratulatory appearances of the other MIR characters beyond Ess and Lukmo were a nice touch and a nod to the ending of MIR2 when Book and Frame were being congratulated by their friends on their engagement. Book/Toey as the Director was also a nice surprise addition.

New Topic
Be the first to create a discussion for Make It Live: On The Beach