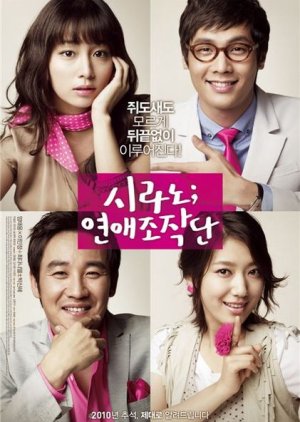 The Cyrano Agency consists of four people from a theater troupe who offers a unique cupid service for lovelorn clients. The company intricately devises and implements schemes, custom tailored to match the interests of their intended target, for the ultimate goal of obtaining romance for their client. The boss and mastermind behind the agency is Byung Hoon. (Source: RottenTomatoes) Edit Translation 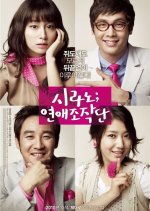 I was hunting down Lee Min Jung's films and so I found this plus the rest of the cast seemed great so I end up watching this with great expectations.

The general story wasn't attractive or somethingspecial, it was sort of average.

*I really loved the opening story. At that moment, I thought I would rate this fim with a 8-9 but then everything didn't went the right way.
*I really can't seem to think about any other positive points.

*The story wasn't captivating which created many balnk moments.
*The leads mixture was really unnecessary because it was obvious who's going to end up with who.
*The general plot wasn't pleasant to watch.
*The story's development didn't deliver anything memorable.

*The only thing that counts for this film is the acting departlent. Although it wasn't impressive but the cast was pretty good.

*Park Shin Hye: she lead the stronget character here, (I kept remembering how she looked like in you're beautiful but I believe that's a normal reflex): she did a good job and her role was the only likable one.
*Lee Min Jung: I was unsure about her character here but the acting was well done.
*Uhm Tae Woong: Although I like the actor, his character was so much resentable that I almost hated the actor but his acting wasn't bad.
*Choi Daniel: No comments on his acting but as a cast he was okay.

The ending is something good too, it was nicely made and fun to watch especially the last scene.

*I didn't enjoy this film. In fact, I was counting time until it ends because I don't drop films.
*I was bored and regretful for watching this.

*If you're rom-com lover then you may want watch this..
*If you like several cast films then you may like this.
*If you're not a fan of any of the lead actors then don't even bother about this.

Completed
Jeaniessi
21 people found this review helpful
Other reviews by this user
0
Jul 2, 2011
Completed 0
Overall 9.0
Story 9.0
Acting/Cast 10
Music 8.0
Rewatch Value 8.0
I liked this movie a lot. I heard about it last year on a blog somewhere and it piqued my interest right away. When I wasn't able to find it with English subs I sort of forgot about it for a while. Then I started to notice Uhm Tae Woong. I'm glad I did.

Like the synopsis say,s the movie is about a troupe of down on their luck actors who open a dating agency and utilize their skills to help people win the object of their affection. It's fun watching the tricks they come up with to hook the prospective mate for their clients. Things take a complicated turn when a man comes in hoping to acquire their services and the woman he fancies is the ex love of Byung Hoon (Uhm Tae Woong).

The story obviously plays on the theme of Cyrano De Bergerac and it's done quite well. But this is not a re-telling or even a moderization of the old classic.

The set design is wonderful. I wanted to hang out in the old theatre where the troupe has their head quarters. The dynamics of the troupe and their interactions were some of my favorite scenes. Although this is not strictly a comedy, there were times when I laughed out loud. I consider it a success when a movie can draw a spontanious loud laugh from me rather than simple amusement. Uhm Tae Woong does a great job here as well as Park Shin Hye (that was a surprise).

The main themes of this movie are love and trust and which is more important? There's also friendship and learning to let go.

The director did a good job of setting the mood of this film and telling the story in way that flowed at an even pace. It is a fairly light movie and I can see why it did so well at the box office.

If you're looking for a fun movie to watch that isn't too dark and yet not overly light and fluffy, this one is a great pick. 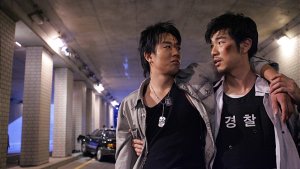