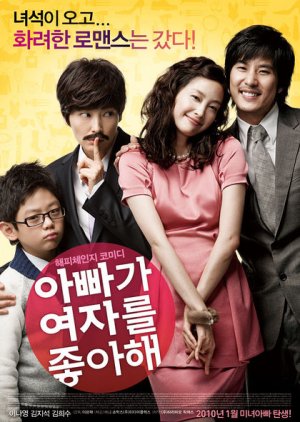 In the comedy "Lady Daddy", a young child from a divorced family searches for his father. What he doesn't know is that his father is now a woman after having sex reassignment surgery. His father. Ji Hyeon was a medical student but is now a photographer... Edit Translation 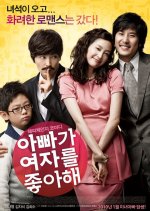 
“Lady Daddy” is a film which certainly wins points for what is an unusual and brave concept, being a romantic comedy of sorts which revolves around the fact that its female protagonist used to be a man. Directed by Lee Kwang Jae, the transgender epic, also referred to by the easily misinterpreted title “Dad Likes Women”, the film stars popular Korean actress Lee Na Young (recently in Kim Ki Duk’s “Dream”) in the lead role, with actor Kim Ji Suk (“Take Off”) as her confused love interest.

The plot kicks off in conventional enough fashion, with Lee playing Ji Hyun, a successful photographer whose life seems pretty perfect, not least since she has caught the eye of a handsome, if perhaps a little dim man called Jun Seoh (Kim Ji Suk), who works on special effects for films. However, Ji Hyun is hiding a rather big secret, and her past returns to haunt her in the form of a young boy who one day turns up at her door looking for his father – who just happens to be her, with the boy having been conceived during the pre-op days of her youth. Slowly warming to the lad, she starts to play the role of both aunt and father, dressing up in man’s clothes and painting on a moustache, a deception which causes havoc in her personal life.
Although the viewer is obviously aware of the coming twist, director Lee wisely takes time to build up to it, establishing the characters and their relationships, and setting out their feelings for each other, all the better to test their bonds and comment on the male/female divide once the cat is out of the bag. More importantly, through this the film also gets the viewer to care for protagonist Ji Hyun up front, and to see her as a human being, rather than simply as a man who has become a woman, fleshing out her character with flashbacks which actually serve a purpose for once.

Indeed, much of the film revolves around her trying to relate to her son, and to accept responsibility for him and work out how to fit him into her life, an issue irrelevant to her gender. Although she never comes up against too much intolerance, and as such the film is not as challenging or provocative as it might have been, it does a solid job of portraying the difficulties faced by transgender individuals, both practical and emotional. As a result, the film works well as a character drama and as a personal journey, though thankfully one without too much preaching or melodrama. Lee Na Young is very good in a fairly complex role, and though the film’s romance never rings particularly true, she is a likeable heroine, enough so to keep the viewer interested in her trials and tribulations, self inflicted or otherwise.
Relationships, romance and the exploration of masculinity aside, the film is also pretty funny, and it takes a marked step into some fairly broad comedic territory around the halfway mark once Ji Hyun starts dressing as a man – basically just by wearing a short wig and a moustache, a disguise unlikely to fool anyone, least of all the kid. Unsurprisingly, this makes for lots of mistaken identity gags and misunderstandings, most of which are quite amusing, with Lee never laying it on so thick as to undermine the film’s premise, or to play it for cheap, distasteful laughs. Things do go a little too far with a needless subplot in which the boy’s parents assume he has been kidnapped after being spotted with a man, though this does at least add a little momentum to the plot during the latter stages. Clocking in at nearly two hours, the film is a touch on the long side, though it generally manages to engage, if nothing else to see what will happen when the painfully slow, though earnest Jun Seoh finally realises the truth.

As such, despite its potentially provocative premise, “Lady Daddy” is a surprisingly conventional character piece, and an entertaining, above average example of the form at that. Dealing with interesting themes, it certainly has more depth than the usual Korean romantic comedies, and for once actually does have something to say beyond the usual ‘be yourself’ platitudes.

Completed
SmileHoney
2 people found this review helpful
Other reviews by this user
0
Jun 4, 2015
Completed 0
Overall 8.0
Story 7.5
Acting/Cast 8.0
Music 6.5
Rewatch Value 7.5
I didn't know anything about the plot and didn't have any expectations so this movie pleasantly surprised me. It was fun, sweet, and heartwarming. It's not a heavy movie. I loved how the movie wasn't afraid to make of it's self and was serious and emotional when it had to be. The movie set aspect added humor and was a nice touch. Also liked the little jokes that were added in between as well. Would recommend to anyone with an open-mind and who wants an easy-going movie.
Was this review helpful to you?
View all