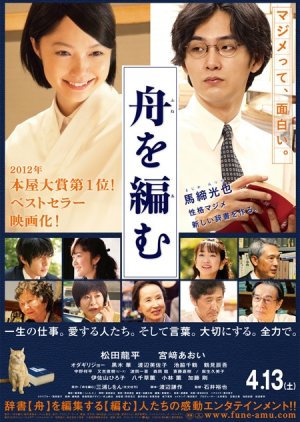 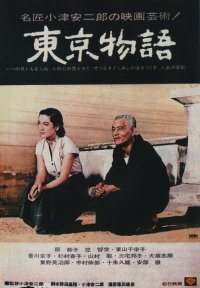 The film main point is making a dictionary titled “The Great Passage”, like the chief-editor stated: “A dictionary is a ship which crosses the sea of words and languages”. Being a lover of dictionaries and words in general, I am ashamed to admit that I was ignorant of the hardships and the overwhelming mission of making a dictionary that may take more than a decade to accomplish. Therefore, this film was such a penetrating telling of an intriguing theme.

While watching The Great Passage, you will be stroked by two things: the story’s process and the characters’ portrayals and interactions. The first part is a quite slow narration of events that may not sound impressive at first sight. However, with the film progressing; many parts start to connect and the plot becomes as solid as ever. Moreover, light moments were also used to add some entertainment such as the editors eavesdropping on young girls’ conversation to find out new words invented by the younger generations. Although, this film may not be to everyone’s liking because of the theme and the very slow events’ development but I believe that was the perfect way of making such a film.

The second part is what makes the film quite special too; this film’s characterization was carefully handled to not appear surreal or lacking. For instance, the male lead Majime (literally translated as “serious”) was a quiet man who finds trouble with expressing himself; he’s always surrounded by books and has zero friends and thus no social abilities. The only one who’s able to understand him a little is his landlady. When such a man gets the chance to make a dictionary, he was inspired and determined to make it his life goal. In the meantime, he falls in love and starts struggling to win his lady’s heart, despite his lack of self-expression, while continuing his dream of making the dictionary come to life.

On the other hand there are his co-workers at the dictionary department; his fellows in this enormous mission of defining, refining and editing thousands of words in a modern-day dictionary. All of his colleagues were quite endearing but the most captivating character must’ve been Nishioka; an entirely opposite character of Majime; talkative, social and very affectionate; he was Majime’s right hand because dictionaries can’t be made by bookworms alone.

The acting was powerful. Matsuda Ryuhei is a very talented and versatile actor; I’ve got the chance to see him in five different roles so far and I loved him in all of those but this must be where I become a great fan of his acting style: expressive, calm but turns intense in need. His portrayal of Majime’s was perfect; he involves you with his character at every facial expression. Other actors were also quite good in here especially Miyazaki Aoi and Odagiri Joe, one heck of an iconic Japanese actor.

The selected music for this film was very well synchronized with the film’s theme and developments. It adds a great taste to the watching experience. The cinematography was also pretty well conveyed considering the fact that this film contained many time jumps from the 1995 till 2010.

Do not watch if:
-You can’t handle slow films.
-You’re looking for romance.
-You’re not interested in dictionaries or words.
-You find inspiring stories “boring”.

The Great Passage is a motivating film that handles a different topic. It’s certainly not for everyone but if you can handle it then it’s undoubtedly one of those hidden gems that leave you with a smile on your face.

An emotional state where you feel affection for someone and you can't get that person out of your mind, affecting your ability to focus on other things.

When fulfilled, feels like you're on top of the world.

This is the film's definition of the word love and I really love this film that I call this a masterpiece.

Word hunters that's how I described dictionary makers, this movie show their fun way of gathering words and how they decide for the accurate meaning of the word and how the people use that word. This movie will make you realize that making dictionary is one of the hardest jobs in the world. A movie about making dictionary seems boring but to me its different and this is why I love japanese movie they offer different story to movie lovers like me. Its a must see movie especially if you love words and your into japanese language one of the most informative movies i watched. I love how they compare a dictionary to a boat floating into a sea of words. At first I thought this movie will become artsy slow film but to me it was not a slow movie..I call it well executed. So many unexpected things in this movie, judging the poster and reading the synopsis who can tell this movie has the lamest love letter and the lamest proposal ever LMAO!!

The acting is great..I thought this is the first time I saw ryuhei matsuda but It happens that he is the japanese guy from the raid movie no way you can tell its the same person. You can tell matsuda really study his character and didnt just copy any nerdy character from other movies, his way of portraying a nerdy/serious guy who dont have social skills but ironically who loves words is really terrific..he really deserves the best actor award on this. Supporting character are great too like odagiri and miyazaki...no nonsense acting by miyazaki and this was the first time i saw odagiri portray this type of character, his chemistry to the main lead is great their personality is different but they form great moments on screen.
The music is great too totally sets the mood and fits the story and I love how the director capture the sounds from the background which adds to the ambiance.


This film lefts a question that I can't probably know the answer forever.

What is the true definition of the word right?

Completed
MysteryMel-Bookish
6 people found this review helpful
Other reviews by this user
0
Dec 7, 2013
Completed 0
Overall 8.0
Story 8.0
Acting/Cast 8.0
Music 9.0
Rewatch Value 7.0
The painstaking efforts to develop the 'great' dictionary artistically told through the eyes of various people & the long term relationships required to complete said task. This movie is not for everyone yet everyone should view it to get the behind the scene efforts & time of the few to insure words are defined correctly, those same words we take for granted today each time we query on google or any dictionary - someone had to define, explain, and refine it. The true accent to this movie was the music score - well done & well placed giving the finishing touches for a artistic, well directed movie.

It shows how a person can change from a simpleton to someone who is respectable. Though the initial pacing of the movie was slow, Ryuhei Matsuda portrayed his character as Mitsuya Majime very well and made the movie enjoyable. I’m also very happy to see Aoi Miyazaki as a supporting actress in this film along with Joe Odagiri. I didn’t even recognize the guy until I looked up the main actors profiles. Despite being a supporting character, Odagiri had a vital role in the whole film and I liked how he was able to add a happy tone to the whole movie.

As for the story, being in a corporate setting and in a world where money runs, I love the concept that the main characters strive hard despite the fact that they are doing something which needs maximum effort but minimal financial back up and takes a LOT of time… more like at least 15 years to be exact. Adding to it is that the start of the movie setting was in the 90’s wherein computers were still deemed as a simple tool for typing and storing devices. These were the setbacks the characters had to go through, but they were people who were looking for modern words and gave meaning to them.

Overall this movie was enjoyable because of the character development and setting. It has its own humor which catches me off guard most of the time because the movie runs in seriousness.