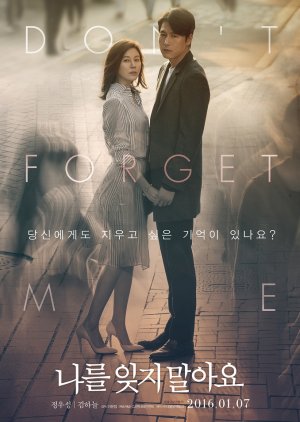 Completed
moshito
13 people found this review helpful
Other reviews by this user
0
Sep 20, 2016
Completed 0
Overall 9.0
Story 10
Acting/Cast 9.0
Music 8.0
Rewatch Value 7.0
To be honest, it's difficult to write a review about Don't Forget Me. Given the context of the plot, the film strikes many emotional cords, but to discuss them would give the movie away. Here's my best effort:

Don't Forget Me is a film that tackles heavy and sensitive subject matter. It's a story about dealing with grief and struggling to cope with ones reality, and the frustrated dedication of those that love and support the bereaved. The movie is a slow burner. The story takes its time unfolding — you wonder what the intentions of the characters are, what this is really all leading to. Suddenly, the movie comes into its own, and it's like you've been hit by a truck. You were fine, and then you're in tears. You suddenly realise the depth of the movie, that you really were watch a true romance but you didn't know the extent of it til the moment it hit you. Suddenly you see that every character has a purpose, and every character acted the way they did for a reason.

It's a beautiful film, and for those of you, who like me, have tried to be a pillar of strength for someone, this is definitely one you can relate to.

If you're looking for something bright and light, this isn't it. But I urge you to come back again when it suits your mood.

Completed
Keylu
7 people found this review helpful
Other reviews by this user
0
Sep 21, 2016
Completed 0
Overall 9.0
Story 10
Acting/Cast 10
Music 7.0
Rewatch Value 8.5
Wow. This movie really hit me. I cried so much during this film because in the beginning, I had no idea what to expect. The description for what the movie is about is vague compared to what actually happens. It was a little confusing at times, because they switch back and forth between the present and the past over and over. However, once the information becomes clear about why he lost his memory and who the girl is to him, it'll hit you right in the feels. I cried so much at the last few scenes because I finally realized what the storyline was telling me straight from the beginning. The acting was perfect and the ending was just what I hoped for, although I wish I could change the past for them.

Completed
mOonwake
0 people found this review helpful
Other reviews by this user
0
Dec 26, 2016
Completed 0
Overall 6.5
Story 8.0
Acting/Cast 8.5
Music 7.5
Rewatch Value 4.5
I decided to watch this movie because it was psychological and i really liked movies with that genre.

With the movie, the story was good and the actors were good but then how the movie goes is just too quiet. Too quiet in the sense that in the middle of watching the movie i became bored but still i finished it though. The twist is a good idea but the execution is poor. Poor because when it was the climax i was just like "ahh..that's why" not like how i would usually expected to wherein it would leave you with tears, goosebumps or just the feeling of contentment of knowing the exact reason of the events in the movie.

If i will be asked if would want to watch again, i would say "no" not only because i really don't like watching the same movie twice or more but also because i can't find the reason to watch it again.

It was not a waste of time but not a great use of time either...

NOTE: mainly my own opinion, i just wanted to help so i hope you would respect my views about the movie...THANK YOU :)

Completed
Trouble-chan
1 people found this review helpful
Other reviews by this user
0
Nov 4, 2016
Completed 0
Overall 9.5
Story 9.5
Acting/Cast 10
Music 7.5
Rewatch Value 10
This review may contain spoilers
I often think that, whilst most people sympathise with the amnesiacs, those who are with them and have their memories intact, are the ones we should be sympathising with the most. It's harder for them as they remember it all and yet have little they can do - yet they have to live with being treated like a stranger by someone they deeply love.

That said, I struggled to sympathise with the wife - sometimes loving someone so much is destructive. I can't say too much because...spoilers.  But every time I watch it I come away with the same feeling that she made everything about her;  which is, of course, not helpful to him.. Time is *not* a great healer (if it was it would've cured cancer) but it does pass and yet she doesn't get that going back over and over never works......

I'd like to think the lives of the main couple improve and they're eventually happy again, though I'm not actually that hopeful because the wife refuses to let this depressing cycle end. This is one open-ended movie where I appreciated why they left it that way........

Story - 9.5/10 (I think there were chances missed to explain more of their backstory since the accident as you're lead to believe this cycle has happened before, more than once)
Acting - 10/10 (main couple deserve that alone).
Music - 7.5/10 (very m'eh)
Rewatch Value - 10/10 (I've already watched it 3 times recently; it's the sort of film you keep coming back to to see if things can be done differently for a different outcome.)
Overall - 9.5/10 (again because of the missed opportunity to show the viewer all those other hinted at attempts she's made).