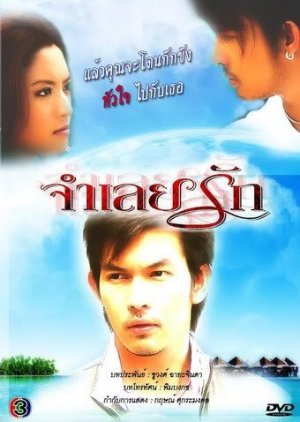 Ongoing 14/18
shibachibi
10 people found this review helpful
Other reviews by this user
1
Jan 25, 2016
14 of 18 episodes seen
Ongoing 1
Overall 5.5
Story 5.5
Acting/Cast 6.0
Music 5.5
Rewatch Value 5.0
So, right now I'm kind of into lakorns after finishing Neung Nai Suang 2015. I really like love-hate relationships, so I looked forward to this one. As I searched for lakorns to watch, this appeared on at least 2 recommendation lists. After seeing the premisse, I wondered why since the plot was pretty simple. After watching it, I feel that the plot isn't just simple... It is dumb also.

Too many things did not make sense. I felt silly watching this - such a surprise for me, since I'm not very demanding when it comes to dramas.

Harit was a jerk from beginning to end. He went from crazy kidnapper to scary stalker and even something else in between that I won't tell.

Soraya frustrated me like no other, though I didn't exactly hate her. Just thought she was dumb.

I skipped all the scenes with Sansanee, only managed to watch the ones that had something to do with the main couple.

Ongoing 14/18
rhonda_yvonne
2 people found this review helpful
Other reviews by this user
0
Feb 8, 2018
14 of 18 episodes seen
Ongoing 0
Overall 10
Story 10
Acting/Cast 10
Music 10
Rewatch Value 10
I binge watched this drama as it really grabbed my interest!! Loved the cast and the islands!!! The male lead was really into his role!! The female lead nearly drove me batty after she got off the island!!  Of course the female lead's character was probably nearly batty herself before it was over!!! Although this is not a good way to start a relationship I'm glad  it ended well!!!The last 15 minutes was a real hoot in my book!! Give it a looksee if you like these kinds of dramas!! You won't be disappointed I promise!!
Was this review helpful to you?

Completed
cascayew
0 people found this review helpful
Other reviews by this user
0
Mar 22, 2019
18 of 18 episodes seen
Completed 0
Overall 5.0
Story 3.0
Acting/Cast 6.5
Music 7.5
Rewatch Value 2.0
This review may contain spoilers
I had a lot of trouble writing this review, mainly because my biggest issue with this lakorn was the story. I read the synopsis so I knew what to expect, but what it came down to was that I immensely disliked how it was conveyed. I know Thai lakorns tend to get remade every 10 years or so, but I honestly can't imagine how this storyline could fit within this era where technology has gotten far and people are more vocal about being harassed. Bear in mind, I actually enjoy slap/kiss dramas a lot and was able to watch Sawan Biang (tho I didn't enjoy that either) but at least the story there was set up in a way that was believable (at least in the drama world).

So my issues with the story are this:
1. ML mistakes FL for her cousin. Sure it was done in rage so I guess that was enough to mistaken her, but I wonder why the FL's picture was in his bro's book in the first place. He was so in love with the FL's cousin and even painted a picture of her. They also paint the ML as this smart and compassionate guy but I'd think he'd do more research on her before he went as far as kidnapping.
2. Their love story - while I can see why the ML would like the FL, I felt like this came out of left field for me. I mean, he shows inklings of feelings for her then suddenly it's full blown I love you blah blah blah which made me backtrack a couple episodes to figure how it developed. I also don't see how the FL could possibly love the ML since he kidnapped, enslaved, trapped her on an island with no escape, r*** her and much more. Call it Stockholm syndrome if you will, but she should've just called the police as soon as she was let go.

There are other little things that bothered me (like the pearl bracelet) but those were the two main ones. Honestly, I think the FL was better off with her childhood friend who was the real hero of this story. He knew something was wrong when she went missing, was properly concerned and was the actual person who saved her when young. Her sleazy cousin, who had one of the worst haircuts, was terrible as per usual of any lakorn but I'm glad she got her comeuppance and the guy had enough sense to leave her. I actually remember the music in this lakorn, and there's one song that I really like so at least I got something out of this. Bottom line, I wouldn't recommend (unless you're bored) and wouldn't rewatch.

Was this review helpful to you?
Ongoing 14/18
Lady Nimue
1 people found this review helpful
Other reviews by this user
0
Jun 17, 2017
14 of 18 episodes seen
Ongoing 0
Overall 5.0
Story 5.0
Acting/Cast 6.5
Music 6.5
Rewatch Value 3.5
This review may contain spoilers
This is the first review that I posted in the internet.

Watch this drama if you are a fan of slap-kiss dramas and if you like to waste your time. Honestly, I was entertained watching this lakorn.

Story-
There's nothing much besides the revenge plot with the ML mistaking the FL for her cousin. Because of that misconception, poor FL has to suffer a lot from him. Not only from the ML but also from her cousin as well who is interested on the ML. I won't say much because the rest would be spoilers.

Actors/ Cast-
ML did well as the vengeful brother who at the same time is out for revenge and get the girl whom he likes.
FL is a screaming banshee on the first few episodes and might want you to skip some of the parts.

Music-
I have a weird taste for OSTs. I had an LSS with the opening and ending songs.

Rewatch Value-
I might rewatch some episodes but not the drama as a whole. I can't bear feeling frustrated again with the Soraya's cousin and aunt (who are bishes btw).

Overall-
I completely understand that this is an old drama so I'll just ignore the cinematography. The island setting was beautiful though.

Final Words-
Having watched a few slap-kiss dramas, I can say this one was really intense in the first half. Especially on the FL. She had to suffer a lot. It wasn't her fault that she suffered under the hands under the ML but as for suffering under her cousin was due to her own stupidity.

There is a limit to the extent that Soraya could owe Sansanee a favor. Even though if her cousin did a huge favor to her, it doesn't mean that she has To circle her life around her cousin ALL THE TIME.

Sansanee was the usual bitch queen rival that you can usually find in slap-kiss dramas. I get it that she is pretty but I don't why why would men in this drama would fall in love with her. She changes men like she changes dresses!

As for Soraya's childhood friend, he deserves a lot despite being in the background.

Watch this drama if you are a fan of slap-kiss dramas and if you like to waste your time. Honestly, I was entertained watching this lakorn.