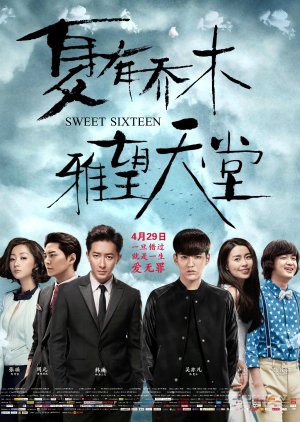 At the beginning: Beautiful and warm...
Near halfway: Heartbreaking... (on unrequited love)
Halfway: Dark and destructive
Ending: Hopeful (That's a hint that it ended well.)

The cinematography and the amazing music went well with all the scenes. I just wish Xia Mu would have more dialogues, but I understand he's a stoic and emotionless character from the start so he wouldn't speak much. Rather, he will progress and develop as a character through action. You'll see how much Xia Mu has grown and how he became a stronger person throughout the movie. He had gotten himself in trouble many times for Ya Wang. Even though he was impulsive, he was heroic on most events, and brought together this message and lesson to the movie:

"Love is courage, love is joy, love is sacrifice, love is not a sin. Once missed, it'll be a lifetime."

NOTE: Also please watch the movie first before you decide to dig up the real ending to the original story... You'll thank me later.

Completed
Julie
6 people found this review helpful
Other reviews by this user
0
Oct 12, 2016
Completed 0
Overall 9.5
Story 9.0
Acting/Cast 10
Music 10
Rewatch Value 10
So I would give it a perfect 10/10 but for me the ending was too upsetting. I wish it wasn't. For those who aren't looking for your stereotypical happy ending (I mean idk, maybe some people can find it somewhat happy... kinda?) then they'd really like the ending.

Otherwise all I got to say was acting was ON POINT. Great. I'm so happy because Kris kinda disappointed me a bit in his Never Gone role so I was a bit nervous but it's obvious that dramatic characters suit him amazingly well.

Hangeng's characters is basically probably every girl's dreamy boy next door type and the female actress was stunning as well.

Honestly, acting just.. amazing. From everyone.
Story was amazing as well, just not my kind of ending hahah. But generally. Just a great movie. But prepare yourself for some emotional turmoil because "sweet" sixteen is far from being sweet and the whole movie had me going up and down and up and down the entire film. Unpredictable, but luckily, the mood change was not confusing at all. Very clean and clear story telling, which is always great for a movie.

In general, I am already putting it on my rewatch list. I personally was not disappointed at all. For those that read the book and then watched the movie, sorry to burst a bubble but movies never live up to their books. Trust me. So don't make an unfair comparison. As someone who looks at it subjectively because I didn't read the book before, as a movie, this is amazing and definitely worth a watch!

Completed
AlexisOlivia
2 people found this review helpful
Other reviews by this user
0
Oct 6, 2016
Completed 0
Overall 9.0
Story 9.0
Acting/Cast 10
Music 10
Rewatch Value 8.0
This review may contain spoilers
What attracted me to this movie was Joo Won, but I wasn't aware of the character he'd play......which I didn't like (but in a good way since he acted so well).

I wasn't sure about the whole Chinese dubbing of Joo Won voice...but I mean it is a Chinese movie so DUH , but his performance makes you forget that.
I thought the whole cast did a great job and the story was different. It was a very emotional movie....and I teared up a little. I hear it's base off of a book? if so, I really would like to read the book now so if anyone knows where I can read it please let me know.

I don't want to give any spoilers away, but I do recommend this movie.

Completed
PKsuperfan
2 people found this review helpful
Other reviews by this user
0
Oct 3, 2016
Completed 0
Overall 3.5
Story 5.5
Acting/Cast 9.0
Music 5.0
Rewatch Value 1.0
So, I watched this movie in theaters and I am the one who added a summary on Wiki for it. I went to watch with my sister because I did not want to watch it alone. It is very hard to say in general I disliked this movie, for the most part I just hate the ending.

I am a fan of Kris Wu and that is the only reason why I went to watch this movie in the first place, but, I really ended up disliking his character at the end. For those of you who have watched it, I know why he did it, but, he was still wrong and it is against my moral beliefs. For those of you who haven't watched, I have a hard time recommending this movie to anyone. I mean, I had fun while watching it but, it kind of does not make you ever watch to rewatch it. The rewatch value for this movie to me is nothing.


For those of you who like Joo Won, sorry, guys he is evil and does not get better, and he is the only Korean in this film. He is a great actor in this film, though, you really hate him.

Also, I feel like this whole plot could have been fixed if only Kris had not _____. I felt like the movie led us up to something and then never fullfilled what it promised to us earlier. I mean, really Kris should have never _______ because the movie told us he was just that good and made a point of making that point, but, then he still ________. Ugh, why did Kris ____?

Anyway, the music was not really memorable except for Kris' song which can be listened to without watching the movie.

Frankly, as far as the plot goes I did not care what guy the girl went with. In fact, when I went into the movie I knew it was sad, but, I thought it was going to be sad for different reasons. It was really sad, but, not because of the love triangle. Also, I did not like the side couple (well, just the guy, the girl was fine) so, it was incredibly annoying when the guy was a friend of our main character.

So, in the end I am not sure I reccommend this movie at all.

Completed
Michelle
4 people found this review helpful
Other reviews by this user
1
Feb 9, 2016
Completed 1
Overall 7.0
Story 7.0
Acting/Cast 9.0
Music 7.0
Rewatch Value 4.5
Its alright, Not bad. The rewatch value is up to you. I wouldn't recommend it because its not worth the time, but it is worth watching it when you have free time on your hands. Its pretty good.
SAD! WARNING: SADD
SADD
Was this review helpful to you?

Completed
mobosies
0 people found this review helpful
Other reviews by this user
0
Jun 6, 2019
Completed 0
Overall 7.0
Story 7.0
Acting/Cast 9.5
Music 7.0
Rewatch Value 7.0
I Love Kris Wu, he is a big part of why I Watched this. I saw Kris Wu and I thought "I must watch this." then I saw the trailer with Han Geng, and Joo Won, and I thought "I very much must watch this."

Joo Won seems to like to play intense roles, this is no exception. The story was fun and cute, until it wasn't. The characters were fun and cute, until they weren't. The acting was absolutely amazing, all along (even Joo Won's dubbing was impressive, unless he wasn't dubbed????).

That being said I felt the story was a bit disjointed. it needed a little something to make it seem less fragmented. That ending though. *insert angry confused face*

Completed
Senpai
0 people found this review helpful
Other reviews by this user
0
May 21, 2017
Completed 0
Overall 7.5
Story 8.0
Acting/Cast 8.0
Music 7.0
Rewatch Value 7.0
Why "Sweet Sixteen"?
"Sweet Sixteen" is a movie I had not heard of, the English title "Sweet Sixteen" makes absolutely no sense with regard to the theme. And because of the title, I thought this would be a romance or a romantic comedy. But it turned out to be something else; This was a drama.
It is a story that follows a troubled boy named Xia Mu played by Kris Wu, who is taken to adoption, where he grows falling in love with his adopted sister Shu Ya Wang played by Shan Lu. But when something terrible happens to her, Xia Mu steps up and takes revenge, seeking to correct the wrong.
The story is good, to a certain degree, pleasant enough to the point where this terrible event happens to Shu Ya Wang. From there, the film turned out to be a farce. The film has some good acting performances in it. And I especially liked Shu Ya Wang. "Sweet Sixteen" had the potential to be a memorable movie, but the events of the story were marked by a farce! And that ruined the whole context!

Completed
PsychosinnerWokeAsian
0 people found this review helpful
Other reviews by this user
0
Nov 28, 2018
Completed 0
Overall 8.5
Story 9.0
Acting/Cast 6.0
Music 6.0
Rewatch Value 8.0
There's nothing worse than knowing the person you love, doesn't want their paradise with you but someone else. Xia Mu his love for her is so deep and pure yet it reaches the height of obsession. Even though Xio Tian is a good guy and it was heartwarming watching them grow up together, I could totally relate to Xia Mus feelings toward his foster sister. That Joo Won cameo I have mixed feelings about it but tbh it's because he gave that character this evil touch. But I just felt his being a villain it was done in a not so subtle way. Especially in the beginning it was kind of cringey but then it got better and I was completely invested in the characters. I thought the ending was perfect. But this movie is messed up and I'm heartbroken over all three of them. Kris, obviously, he's beautiful and he gave his character a kind of a sinister feel which I loved. Seriously, he was the one I related to the most maybe because I'm weird that way. So it was heartbreaking to watch. But truly despite its faults this one is worth the heartache.

Completed
Terrica18
0 people found this review helpful
Other reviews by this user
0
Dec 8, 2018
Completed 0
Overall 8.0
Story 7.0
Acting/Cast 7.0
Music 7.5
Rewatch Value 3.0
The series was very thought-provoking. I am not a fan of movies that portray violence of some sorts. This was a tear jerker for sure. I was not expecting this. I will say that I what I saw in this series was the result of tragedy. It really went in to how one tragic event can lead to many others. I won’t say that everything that happened in here was tragic but sometimes one bad event can trigger many others. Overall the movie was okay. I just wish that the ending was better. It was somewhat vague. Not giving a clear ending.
Was this review helpful to you?

Completed
exotic
0 people found this review helpful
Other reviews by this user
0
May 13, 2018
Completed 0
Overall 8.0
Story 8.0
Acting/Cast 9.0
Music 7.0
Rewatch Value 6.5
Being completely honest, I came here because it was one of the movies that Wu Yifan starred in and I'm just a sad ot12 stan ;-; The plot of the story was decent and showed some character development however, it was overall quite depressing. The main character does not end up with Yifan as we all wish she would :( honestly speaking, I did have some hope that the writers would end the movie on a happy note however reality hits really hard and it's understandable that we don't get what we want. Many parts of the story are infuriating, depressing, sad, and frustrating. However, all in all the movie was worth the watch <3 wu yifan fighting