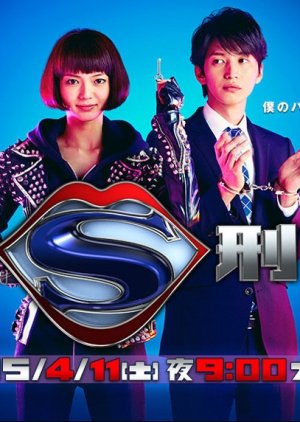 My like for detective dramas stems mostly from the characters' personalities. With so many detective dramas, many cases get repetitive so for me the highlight of these dramas is the team of detectives/policemen etc. I watched doS Deka right after Deka Wanko for Tabe Mikako and at first I just wasn't feeling it. It had its moments where I laughed but other than Maya I found her team to be bland like stale bread plus Okura's acting was corny. I was on the verge of dropping it at first but eventually I stuck around until the end and I'm glad I did. I enjoyed Maya's character like her antics with the superglue stuff and "Fighto" and I especially liked how they developed the relationship between Maya and her chief when Maya started to rub off on her.

All in all, other than Maya this team was more forgettable than some other similar dramas, although I did warm up to them in the end, especially in the last episode; at least none of them were some douchebags that I wanted to punch which is always a plus. I just wished they were more fleshed out. Usually these types of characters each have an episode where they get to shine but not in this one.

The acting was so-so. I like Tabe Mikako and I think she suits these types of quirky roles but some of the other cast's acting was questionable. I never watched Okura in anything before so I don't know if he's acted like that on purpose for his character or if it's standard for him. The others didn't really stand out. The heavy metal-ish music was a good touch (at least for me)

Completed
Reto
3 people found this review helpful
Other reviews by this user
0
Feb 28, 2016
11 of 11 episodes seen
Completed 0
Overall 10
Story 9.0
Acting/Cast 10
Music 9.0
Rewatch Value 10
I didn't expect this drama to be so good, but right from the first episode i knew that i was wrong and now it is for sure in top 3 dramas i have watched. The cases they solve are mostly the usual detective story cases but the way that they made it is really good, i had a really great laugh and of course the best part of the drama are the actors, every actor (main characters) is perfectly adapted to the character they play. Also the friendship and weird personalities of the detectives makes the whole drama perfect.

For bad parts of this drama i can maybe say the fighting scenes (especially in the last episode fight) are a bit lower quality.

Recommend this show to everyone, it will make you laugh for sure while also pointing out serious questions about serious problems which are relevant for the society.

Dropped 11/11
Sai
0 people found this review helpful
Other reviews by this user
0
Jan 29, 2016
11 of 11 episodes seen
Dropped 0
Overall 2.0
Story 1.5
Acting/Cast 2.0
Music 2.5
Rewatch Value 1.0
I'm going to keep this short. It was a terrible drama. The acting was overdramatic, the characters were unrealistic, and it was just... terrible. I couldn't get past the first episode. Maybe it got better, but considering what a difficult time I had just watching the first episode, I highly doubt it. The S and M-like aspect of it was just... weird. I especially disliked the male protagonist. He was just so so bland and boring. I would not recommend this drama. I feel that even a 2 is too high a rating, and I'm somebody who rarely rates anything below a 6.