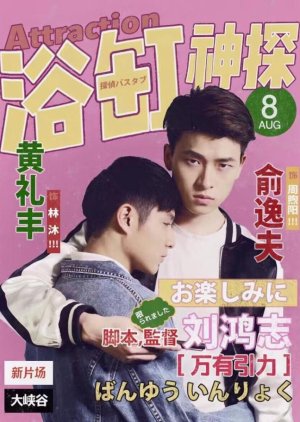 Attraction is a fantasy web movie. It talks about the meeting between 2 straight boys from different social circles, and their story from a fantasy point of view. The story is pieced together with a few short chapters of stories. Edit Translation 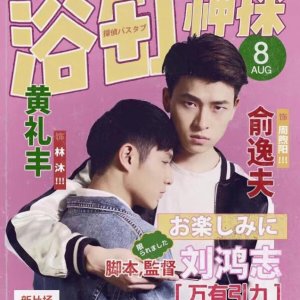 Completed
KainGuru
3 people found this review helpful
Other reviews by this user
0
Apr 4, 2017
Completed 0
Overall 6.5
Story 7.0
Acting/Cast 7.0
Music 5.0
Rewatch Value 1.0
STORY: Uh... This movie is a manga in movie form. It's quite bizarre. The movie even has scenes in it that present it as manga. Basically it's about a wormhole that keeps transporting various things into this guy's house, including a police officer from Taiwan; also has a missing persons mystery. It is campy in some spots, kinda humorous.

ACTING/CAST: Um... yeah. Well the three leads were cute. Everything about this production is weird so I have no idea how to rate the acting.

MUSIC: Well... there is some but lots of scenes with none.

REWATCH VALUE: I doubt it but I'll give it to a friend.

OVERALL: You'd have to see this movie yourself. It does deserve to be watched once if nothing more than to satisfy curiosity. This must have been a cinch to translate to English; the dialog is sparse. It's like a manga with many panels of looks, stares, and such, with minimal dialog--you know what I mean if you read manga. The ending is neutral; neither happy nor sad, just ends.

The movie is basically a manga on acid that is trying to be a crime/horror movie and a comedy at the same time. It, more or less, works, but only because it is just so bizarre you can't tell if it's bad or not. The acting was pretty good, solid enough for me to give it four-ish stars. The sister was really funny and cute and her fangirl/fujoshi habits sometimes made me question the very fibers of my being. The little police guy from Taiwan was adorable and the fact that he thought he was a big tough police guy by yelling at the brother made him even more adorable. The police guy's dynamic and chemistry with both of the siblings is really worth seeing-- if not for the technical aspect, then for the weirdness of their interactions. One of the tags on the movie is 'gay', but I'd probably classify it as more of a suggestive bromance. It's mostly just fan-service and scenes from the imagination of the sister (which was appreciated. Many thanks to you, sister).

The story and film style are both manga-inspired which was super confusing at first and sometimes a little annoying, but I think they worked out all the kinks and by the end the whole aesthetic really worked. A lot of my favorite scenes came out of that weird manga style and I think most of the appeal of the movie would've been lost without it.

Overall, it's a pretty good movie. It's really funny and I would definitely recommend it to anyone who's run through their watchlist and is in need of a good laugh.

Peace and love, and may god bless that little police guy.

New Topic
Be the first to create a discussion for Attraction