Please Take Care of My Refrigerator (2014) 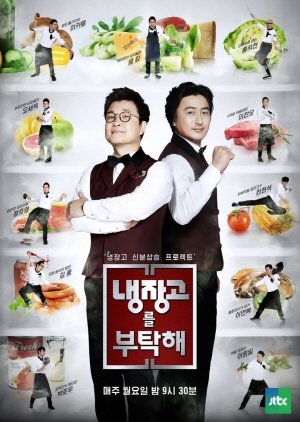 In each episode, two celebrity guests have their refrigerators brought to the filming studio. The hosts go through each refrigerator, with the hosts, chefs, and guests commenting on unusual or otherwise notable foods. Each guest has four of the eight chefs assigned to them, and each guest presents two categories of food that they would like cooked. Each of the four chefs chooses the category they would like to compete in, with two chefs competing in each category. The two competing chefs have 15 minutes to cook a dish using ingredients from the guest's refrigerator. After commentary on the dishes, the guest selects the winner. Edit Translation 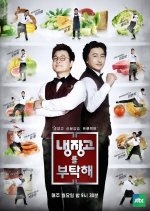 The premise is simple. Two guests bring in their fridge, or its contents, to the studio where four chefs will have two matches to see who can cook the better dish for the guests' tastes using ingredients only from their fridge. Within a fifteen minute time limit. Yes, it gets hysterically chaotic.

There's the hilarious Kim Poong, webtoon writer turned chef and the kind hearted "Grand Master" Lee Yeon Bok who took him on as his apprentice.
Yeon Bok is my favourite, with recipes that leave my mouth watering every time and skills that make even the other chefs fear taking him on each week.

Close in second is Choi Hyun-Seok, a cheeky chef from whom stems a seemingly infinite well of knowledge, skill and weirdness. He boasts and bluffs, but in the end we all know he's making fun of himself. And it's unbelievably funny.

With hilarious MCs, some truly creative and delicious recipes and displays of skill that will make your jaw drop, if you've made yourself a delicious dinner and want something to sit down and watch, it's perfect.

You learn so much form these amazing chefs, and have a great laugh every time as the chemistry from them bounces around the walls as their enthusiasm creates insane energy that will cheer you up, no matter your mood.
I cannot stress just how awesome this show is.

It is NOT your average cooking show, believe me, and if you've never once thought to sit down to an evening of "Master Chef" or "Bake Off" or Such and Such's tour of Thailand, don't include this show in that genre. It's in a league of its own.