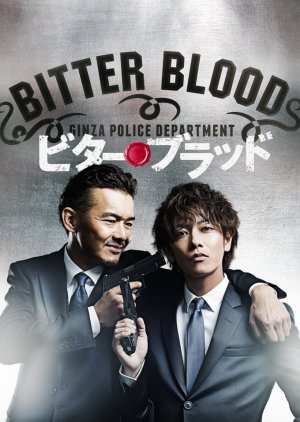 Completed
ChaNee
38 people found this review helpful
Other reviews by this user
0
Jun 30, 2014
11 of 11 episodes seen
Completed 0
Overall 9.5
Story 8.0
Acting/Cast 9.5
Music 8.5
Rewatch Value 8.0
If you are looking for a comedic story that doesn't take itself seriously, then I think you would enjoy Bitter Blood {Partners by Blood}.

I enjoyed it for the fact that the two lead males on screen chemistry with each other as father and son was comfortable and effortless. They just seem to ALWAYS be in sync with each other regardless if it was for comedic timing or emotional timing. Takeru Sato and Atsuro Watabe were great. Their acting never seemed over the top and you felt like this was just normal everyday interaction between them in every episode.

The supporting cast's acting was well done but at some times it was a bit over the top but with the atmosphere of the drama. I didn't mind because it added to the fun and craziness of the episodes. Not too many dramas can be emotional and silly at the same time so I commend the cast for an enjoyable show.

The episodes are a give and take when it comes to story lines. Some episodes that featured the story line for certain supporting characters were well written and the others were worth a side glance of " Really???" but again , I have to say the acting of all those involved made you forgive those episodes and look past the faults.

The main theme song is very catchy. Now that can be a good or bad thing. I do believe if this drama was any longer, it would become like that song from Boys Over Flowers, Almost Paradise. ANNOYING. That's how catchy it is..lol You will like it until you hate it. So far I still like it:)

It's a good possibility that I will rewatch this at some time considering that I rarely rewatch shows. Also I am under the impression that this drama may have a part 2 because at the end of the finale episode in small red writing, it said "to be continued".. Hmmmmm I hope it does.

Completed
Ria
10 people found this review helpful
Other reviews by this user
0
Dec 28, 2014
11 of 11 episodes seen
Completed 0
Overall 10
Story 9.5
Acting/Cast 10
Music 9.5
Rewatch Value 9.5
This is a Fast , Funny and Sweet series unlike Korean series its very short and sweet
The casting is so good I loved each and everyone of them
They have done a great job in this drama
this is my first Japanese serial and I loved it
It's full of Fun not even a single part is boring though less romance you won't really need anything
The hidden love between the father and the son is very realistic and sweet
the only disappointing thing for me is the Drama got over so soon I couldn't get enough of it
Overall its GREAT !!
JUST WATCH IT !! ITS TOTAL FUN, U WILL LOVE IT ;)

Completed
BrightestStar
11 people found this review helpful
Other reviews by this user
0
Jun 28, 2014
11 of 11 episodes seen
Completed 0
Overall 7.0
Story 6.0
Acting/Cast 8.5
Music 7.5
Rewatch Value 5.0
Story wise this dorama doesn't reinvent anything. As a procedural it isn't done well. It tries to surprise us as times but doesn't work all the time. However, since it Never takes itself seriously, all this doesn't bother you and you feel its all done on purpose. Some episodes, specially early on, weren't that great, while others were pretty thrilling.

The main premise was our father-&amp;-son duo who haven't been in contact for a while. The son does have some parents issue but doesn't let it control his life and, when he gets the chance, expresses himself clearly. His personality is extremely cute. You just believe in his shyness &amp; awkwardness. The dad might appear as a bully, but you can see his affection for his son. You can feel some hidden pain that he avoids with his silliness. He's a weird mixture of pettiness and cool, making his character most fun.

The other characters aren't too important but add a nice touch to the mixture. Some of the episodes concerning their characters were well made. The girl in the group was alright. She didn't bother me throughout (except her acting stupidly in that 1 episode). The crush the dorama was hinting on the part of Sahara-kun was cute too. It just welcome spice to the mixture. The villain of the story is 1 dimensional and just here to make the main characters' life harder. He's still creepy enough to keep you on your toes.

I liked the music and the action scenes here as well, though not a fan of our leads' signature move, they make it work ;)

Completed
OhSoEnthusiastic
4 people found this review helpful
Other reviews by this user
0
May 21, 2016
11 of 11 episodes seen
Completed 0
Overall 10
Story 10
Acting/Cast 10
Music 10
Rewatch Value 10
What a satisfying watch! I haven’t been this thoroughly impressed with a drama in a while. The action was actiontastic. The police work actually looked realistic. (No silly 'drama logic.') The writing was witty and the story tightly plotted. I didn't even mind most of the hammy acting you typically see in a lot of Japanese dramas. It actually Enhances the drama! Does part of me wish the romance had been developed more? Yes, but that’s only because I’m a sucker for a good romance. The drama didn’t actually need it. My only complaint? That villain. He was incredibly smart, but I couldn’t take him seriously because of the actor’s acting. (What was with that goofy smile?!?!) But that father son bromance was everything.

Completed
WonByungHoon
3 people found this review helpful
Other reviews by this user
0
Apr 25, 2015
11 of 11 episodes seen
Completed 0
Overall 8.5
Story 9.0
Acting/Cast 7.5
Music 6.0
Rewatch Value 7.0
It started off alil boring and draggy and i almost dropped it but by ep 2 it was getting interesting. The father and son are very funny and their relationship till the end is just hilarious. Its a great show with a glimpse of romance but some stories are just bizarre. I dint care for skunk coz he went way overboard unnecessarily i couldn't stand him. The other was kaizuka, he was annoying with his laugh and he just wasnt a great actor. Overall the show was lacking in direction but the Father and son are worth watching. The music i could do without it wad getting annoying
On another note, the girl looks so much like lee min jung (cunning single lady) i could swear they are related.

Completed
jei
2 people found this review helpful
Other reviews by this user
0
Jul 6, 2014
11 of 11 episodes seen
Completed 0
Overall 8.0
Story 6.5
Acting/Cast 8.0
Music 6.0
Rewatch Value 8.0
Bitter Blood is a great comedic detective series that focuses on the relationships between the detective team rather than putting an emphasis on the overarching plot. If you're looking for something fun with a bit of action, this is the show for you. It's light and entertaining.

I feel as though the cast for the main villain could have been better. However, everyone else, especially Sato Takeru and Watabe Atsuro's acting and chemistry together was fantastic and make the show worth re-watching.
Was this review helpful to you?

Completed
Nyah
0 people found this review helpful
Other reviews by this user
0
Nov 21, 2019
11 of 11 episodes seen
Completed 0
Overall 8.0
Story 8.5
Acting/Cast 9.0
Music 8.0
Rewatch Value 7.0
If you are looking for a short series with funny, a bit action and life of Detective. This is it!
The story is Fast and easy plot but they telling it smooth and fun so I continue to watch till the end without thinking it waste my time at all. I like all the cast and the acting is good for every one of them. It strange that just a simple story but I'm not bored I like the connection between son and father detective so much. It's very realistic, funny and somehow sweet. the lack of all Japanese drama is the romantic part I would say don't expect to see it in this drama but you will laugh for sure lol.

Completed
Alessa
1 people found this review helpful
Other reviews by this user
0
Jan 12, 2017
11 of 11 episodes seen
Completed 0
Overall 8.0
Story 7.5
Acting/Cast 8.5
Music 7.5
Rewatch Value 6.0
I'm not at all surprised that this dorama was so popular when it was released, and let me tell you why.
The plot is quite simple, a young rookie detective on his first day in the force finds out that his assigned partner is no one else that his father; who abandoned him many years ago (and apparently they haven't speak with each other in a long time).
As a detective/investigation drama it fails horrendously. The cases make almost no sense at all, and when they do, they're very predictable. But the great thing about this dorama is that it doesn't take itself seriously; and as a comedy is a great success.
Every case depicted is an excuse to see the fantastic interactions between father and son.
Obviously none of them wants to admit that they really care for each other and having such different personalities there's a lot of humor involved.
And speaking of humor, the rest of the detective division, "the team", although full of clichés, are hilarious. You have the chief, the girl, the nerd, the ladies man, and so on.
The two protagonists make a fantastic job in their roles, and the rest of the cast is pretty good as well. Some people may find the "japanese acting" a bit over the top, but you'll get used to it in no time.
In short, it's a great comedy with bits of thriller, (almost none) romance and (quite a few) sweet family/friendship moments that it's really worth your time.

Also, the music is pretty tv standard but the main theme is terribly catchy! (I can't stop singing it my head :P)