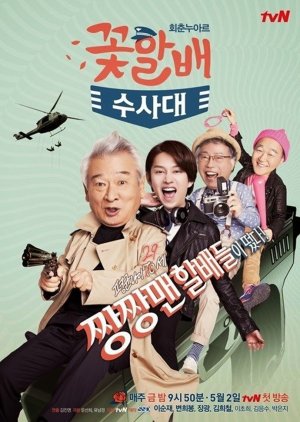 Completed
Jo-hannah
17 people found this review helpful
Other reviews by this user
0
Jul 28, 2014
12 of 12 episodes seen
Completed 0
Overall 7.0
Story 8.0
Acting/Cast 10
Music 10
Rewatch Value 5.0
This is a pretty great story. Just imagine 3 good looking men turned into old funny grandpas out of the blue, and the journey they have to go through to discover why that happened to them. It sounds like awesome to me, and actually it started awesome, I remember how much I laughed in the first episode of this drama. It was probably the most hilarious 1st episode ever made in dramaland...

Well, this drama was lacking in one aspect... I think the idea wasn't as well executed as I was waiting it to be. There were some holes in the story and I felt that some twists didn't have enough field to develop, and maybe it was because this was a mini-drama (I consider a mini-drama, anything below 15-16 episodes) Sometimes I also felt that some events were kinda rushed or suddenly introduced into the story, and yes, that's my only complain about this drama. If you are gonna give me a twist or add something to the story please let me see how that has been built previous episodes. Nevertheless, the story manages to keep your attention every episode.

Just to make it clear: I liked the twists and the events, it's just that I wanted to see why that X or Y situation happened.

Said that, this drama is funny, has awesome acting, and the characters were totally lovable, my favorite ones were Jung Woo and the Pink ahjussi ^_^ Great characters. This is very enjoyable, you'll not get bored and you'll have a little bit of everything: romance, action, comedy, thrilling moments, drama and a satisfying ending, and we all know that's very rare to find in dramaland TT_TT so, it's very appreciated. :) Thank you for that ending, writers.

First, the story: I gave it a ten, because this is definitely one new plot in Korean Drama Land... Just reading the initial description of this show made it immediately into my plan to watch..... Young Handsome Guys turning into Wrinkly Old Grandpas trying to solve the mystery to return Young Handsome Guys again. So we have mystery, police getting some bad guys, a little notch of romance, a huge bucket of bromance (my fav), and so many ROFLing. The ending was just heartwarming. I wouldn't mind a couple more episodes :D

Second, the acting: Seriously, old, REALLLY OLD, men acting 30's, you don't see that everyday, do you?!!
the acting was spot on, for our F4... You really gotta watch to know.. That's all I gotta say.

Finally, I am gonna wrap up by music, which was synced beautifully, and not to forget the little noises popping every once and a while (make you laugh even more)

So.... WATCH THIS DRAMA PLEASE, it's just 12 episodes... not much time wasted

Completed
DreamingKoreanBallad
13 people found this review helpful
Other reviews by this user
0
Jul 26, 2014
12 of 12 episodes seen
Completed 0
Overall 9.5
Story 9.0
Acting/Cast 10
Music 9.5
Rewatch Value 9.0
I really enjoyed this fun yet serious drama - It had me rolling with laughter so many times from episode 1-12
Story: what couldn't be entertaining about young guys turning into grandpa's in the span of a few seconds lol - this drama takes them on the journey to trying to find the culprit who made them old so they can return young again.
Cast: My FAVORITE: Jung Woo (Heechul) <3 I loved him on this drama - and I shipped him with Eun Ji since episode 1 <3 - after him I like Mr.Pink lol - he was so funny (the most comedic one of the bunch I swear lol) - Of course I started this drama b/c I heard Choi Jin Hyuk was cast ;) but he wasn't the reason I continued to watch the rest of the drama - it was a really great drama - it would have been a shame if I had missed it!
Music: Very Entertaining - all of it lol the BGM and the sound effects - hilarious and very fitting to all the scenes -
Re-watch Value: Very High - I seriously feel like re-watching this right away.
Overall it was a very good, very entertaining drama with a great plot.

Completed
unicornislife
1 people found this review helpful
Other reviews by this user
0
Apr 4, 2017
12 of 12 episodes seen
Completed 0
Overall 7.5
Story 7.0
Acting/Cast 7.5
Music 8.0
Rewatch Value 7.0
Pleasantly surprising as I watched this for Heechul but stayed for the grandpas instead.

Story was so so, interesting plot line but quite stupid at some time. Love line quite lacking, no chemistry for the triangle love line. No substance built for the romance to happen. Preferred the sub stories (crime cases) than the main story. But then, the ending is surprisingly to my liking.

The grandpas did well acting as flower boys, exaggerated to be funny and this depends on what kind of humor you prefer (I enjoyed it). Heechul's and Lee Cho Hee's (female lead) acting is lacking as compared to the three grandpas but still acceptable. Cannot expect too much from the other minor
characters/ sub-story leads.

Can binge watch it (since it is short compared to other dramas) during free time. Light and fun drama.

Completed
Dandelion
0 people found this review helpful
Other reviews by this user
0
Feb 6, 2018
12 of 12 episodes seen
Completed 0
Overall 8.0
Story 8.0
Acting/Cast 8.0
Music 8.0
Rewatch Value 6.5
First of all, kudo for the writer to try something new. This drama is not your typical Korean drama. The story is very unusual and unique (as expected from tvn, usually they make unique drama). It has quite a start slow but it built the story to be very funny. Once they turn into grandpa, the story becomes very funny. This drama is more a comedy focus, so forget to have a serious criminal case. The story is lighthearted and great to watch to pass some free time, in addition, you get to see Hee Chul to!  The cases are all very predictable. I think sometimes the comedy is overdone that makes the drama weird.  I think this drama has some potential to get better.

The is a plot twist in the middle. Then the story becomes too predictable and typical a little bit melodramatic k drama. And I fall for 2nd male lead... Sigh.....

Completed
KimAhNa
0 people found this review helpful
Other reviews by this user
0
Jan 4, 2018
12 of 12 episodes seen
Completed 0
Overall 7.0
Story 7.0
Acting/Cast 9.0
Music 6.0
Rewatch Value 6.0
I really enjoyed this series. It's a light-heart comedy with a sprinkle of mysteries. The episodic cases were not that intriguing, but the way the team carries out their investigation was fun to watch. The drama tried to focus on the value of family and friendship (there were parts where it was very heart-warming), but  it kinda fizzled out near the end. The characters were all quirky and funny; very lovable. Their chemistry with one another is just amazing.

I really like the twist of having handsome guys turn to old grandpas. Seeing the grandpa doing things that young 20's something guys normally do was freaking hilarious! My favorite character would be Kang-seok (The Muscle) played by Jang Gwang. He was so adorable, cute and will make you LOL all the time!

The only fault of this show is the length. It was just too short. Given the plot & setting, I felt like they could have done much better if it was a 20 episodes series. There were holes every where with the story & characters. We were introduced to some of the characters' background, but they were never fully elaborated & one of the guys didn't even have a real background! Aside from Joon-hyuk, there was little character development for the others. Even with Joon-hyuk, I felt his changes were so sudden. It was a bit hard to believe, but eh.

This is my first time seeing Heechul act in a series. Given that he is an idol I didn't expect much from his character, but he played his part well. His character Jung-woo was pretty much similar to his idol's personality in real life.  It was not until the very end where I thought: "I would like to see more of Heechul's acting in future drama." The only complaint I have about his character is that Jung-woo was too perfect. He didn't have any flaws! He was just as smart as Joon-hyuk in solving the cases, his personality was charming and easy to get along with compared to Won-bin - who essentially was suppose to be the "charmer." When the guys were still in their young bodies, Jung-woo looked so out of place with his small, feminine frame when standing with the others.

Anyhow, lacking as it may have been, the series was still fun to watch just for the laughs, bromance and great acting from the ajusshi.  I would give this a 7/10. If you don't care much for the lousy plot and awkward romance, then I would recommend you watch this. Watch it for the grandpas. :]

Completed
Ari_Lee
1 people found this review helpful
Other reviews by this user
0
Jun 27, 2015
12 of 12 episodes seen
Completed 0
Overall 7.5
Story 7.0
Acting/Cast 7.0
Music 7.5
Rewatch Value 3.5
This review may contain spoilers
I don't know about anyone else, but the reason I started watching this drama was Kim Hee Chul. Yes, I know he's not a good actor. BUT he's one of my two biases in Super Junior (Si Won being the other). He's also the reason why I even gave the group a second chance. "Sorry, sorry" is just not my thing... Sorry! Not really. I also like Lee Soon Jae, I think he's one amazing veteran actor.

To my surprise, "Flower Granpa" was really funny. I enjoyed it so much that I went through the first seven episodes really fast. The premise was also interesting and I liked that all the grandpas had their own concepts. I called them "grumpy grandpa", "cute grandpa", and... "delusional grandpa". And while Hee Chul and Lee Soon Jae were the main driving force which made me watch this drama, I ended up loving "cute grandpa" Kang Seuki the most. Although, it was kind of hard watching a grown man, who is old enough to be my father, around so much... pink. Did I just show my age? Jijiji.

But as it was nearing the ending episodes, it kind of went down a small hill. The story got rushed. The things Lee Joon Hyuk, grumpy grandpa, started to do made no sense at all. I mean, come on! He's supposed to be a smart police detective! I can't really say much more without adding a plethora of spoilers. Another thing which bothered me was the "main villain". Although I have nothing against the actor who played him, I thought he was too mellow. He didn't give me that "I'm a mastermind" vibe. I just wanted to smack him over the head and tell him to "straighten up" as if he was a teen misbehaving. I just couldn't buy him as a villain. *shrugs*

Although I thought "Flower Grandpa Investigation Unit" was really light and funny at first and I really enjoyed it, I have to say I was somewhat of disappointed with its last episodes. It became too over-dramatic and rushed.

Dropped 12/12
OhSoEnthusiastic
0 people found this review helpful
Other reviews by this user
0
May 21, 2016
12 of 12 episodes seen
Dropped 0
Overall 3.5
Story 3.5
Acting/Cast 10
Music 1.0
Rewatch Value 1.0
This drama was all Over the place in terms of the storyline. And where were they trying to go with the romance? I don’t think even They knew.

But you got to hand to those grandpa's. They were a real riot.

While I was still around to watch them.
Was this review helpful to you?